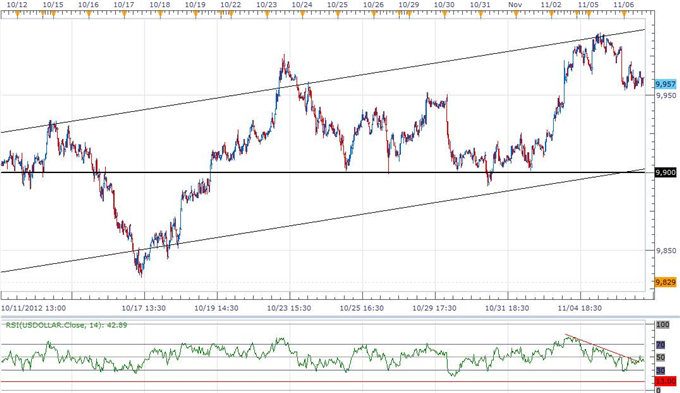 FOREX: USD Index Looks Higher Ahead Of Elections- 10,000 On Tap

The greenback lost ground ahead of the U.S. elections, with the Dow Jones-FXCM U.S. Dollar Index slipping to a low of 9,953, but the outcome at the polls may have a limited impact on the reserve currency as market participants weigh the outlook for monetary policy.

Although the Dow Jones-FXCM U.S. Dollar Index (Ticker: USDollar) remains 21 percent lower from the open, it looks as though the greenback is finding support around former resistance (9,950) as the upward trend carried over from the previous month continues to take shape. As the 30-minute relative strength index clears the downward trend from the previous week, the rebound from oversold territory should prop up the index over the next 24-hours of trading, and the dollar looks poised to make another run at the 10,00 figure as a growing number of Fed officials soften their dovish tone for monetary policy. As the world’s largest economy gets on a more sustainable path, we should see the FOMC will carry its current policy into the following year, and the bullish trend in the USDOLLAR should continue to take shape as market participants scale back bets for more quantitative easing. 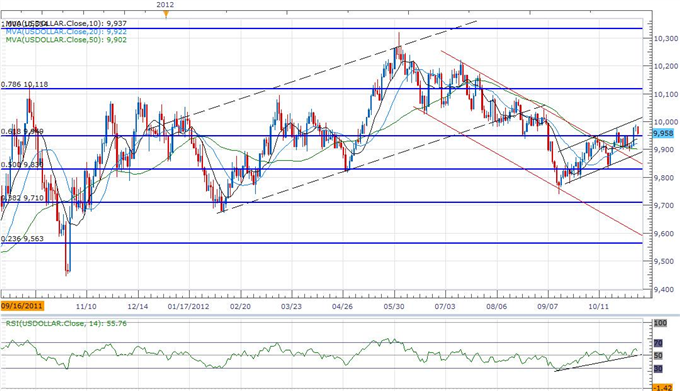 Indeed, San Francisco Fed President John Williams, who also serves on the FOMC this year, argued that the central bank is ‘going to start removing, at some point, accommodation’ as the economic recovery gradually gathers pace, and warned about the ongoing expansion in the central banks’ balance sheet as it raises the long-term threat for inflation. In turn, we may see the FOMC strike a more neutral tone for monetary policy, and the committee may refrain from expanding its open-ended asset purchase program beyond the $40B limit as the fundamental outlook for the U.S. improves. As the relative strength index on the USDOLLAR maintains the upward trend from back in September, we should see the ascending channel continue to take shape over the remainder of the year, and we will maintain a bullish forecast for the greenback as the Fed raises its fundamental assessment for the region.

The greenback weakened against three of the four components, led by a 0.71 percent rally in the Australian dollar, but the recent strength in the high-yielding currency may taper off should the developments coming out of the $1T economy renew speculation for lower borrowing costs. Indeed, the Reserve Bank of Australia kept the benchmark interest rate at 3.25% earlier this week amid the stickiness in price growth, but the ongoing slack in the real economy paired with the slowdown in job growth may put increased pressure on the central bank as the region continues to face an uneven recovery. As China- Australia’s largest trading partner – remains at risk for a ‘hard landing,’ policy makers may look for further insulate the trade-driven economy, and Governor Glenn Stevens may continue to target the cash rate in an effort to encourage a sustainable recovery.