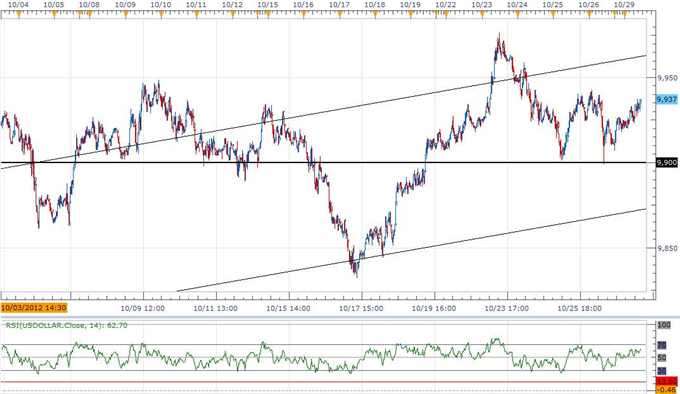 The greenback bounced back on Monday, with the Dow Jones-FXCM U.S. Dollar Index advancing to 9,938, and the reserve currency may track throughout the North American trade as risk sentiment falters. The Dow Jones-FXCM U.S. Dollar Index (Ticker: USDollar) is 0.21 percent higher from the open after moving 65 percent of its average true range, and the greenback should continue to benefit from the flight to safety as the economic docket remains fairly light for the remainder of the North American session. As forex traders scale back their appetite for risk, the dollar may threaten the upper bounds of the ascending channel from earlier this month, but we will be keeping a close eye on the 30-minute relative strength index as the oscillator approaches overbought territory. In turn, the reserve currency remains poised for a small correction over the next 24-hours of trading, but the index may appreciate further ahead of the highly anticipate U.S. Non-Farm Payrolls as the economic docket continues to encourage an improved outlook for the world’s largest economy. 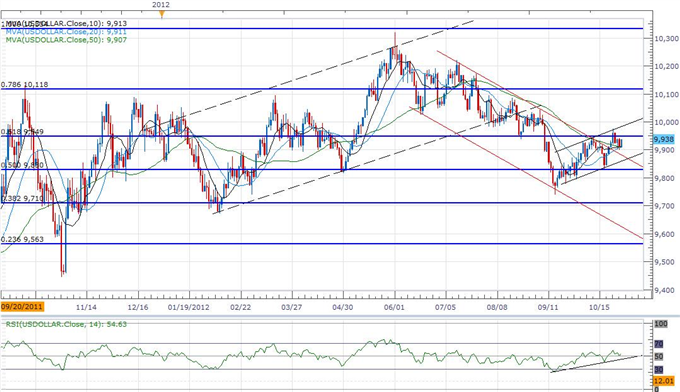 As the ongoing expansion in private sector consumption paired with the uptick in wage growth raises the outlook for growth, we should see the Federal Reserve stick to its current policy throughout the remainder of the year, and the FOMC may refrain from expanding monetary policy further as the recovery gets on a more sustainable path. With ‘Operation Twist’ set to expire at the end of the year, there’s growing speculation that the Fed will expand its open-ended asset purchase program beyond the $40B monthly target, but a growing number of central bank officials may endorse a wait-and-see approach over the near to medium-term as the expanding balance sheet raises the long-term threat for inflation. As the FOMC faces limited scope to provide additional monetary support, we should see the dollar continue to recoup the losses from earlier this year, and the index looks poised to work its way back towards the 10,000 figure as the upward trend in the relative strength index continues to take shape.

The greenback rallied against three of the four components, led by a 0.37 percent decline in the British Pound, while the Japanese Yen bucked the trend as the low-yielding currency benefitted from the drop in risk appetite. As the Bank of Japan is scheduled to announce their rate decision later tonight, there’s mounting expectations that the central bank will expand its asset purchase program by another JPY 10T, but the move may do little to weaken the Yen as positive real interest rates in Japan continues to increase the appeal of the low-yielding currency. In turn, the pullback from Friday’s high (80.36) may gather pace going into the overnight session, and we may see the USDJPY struggle to hold above the 200-Day SMA (79.48) as the relative strength index continues to come off of overbought territory.