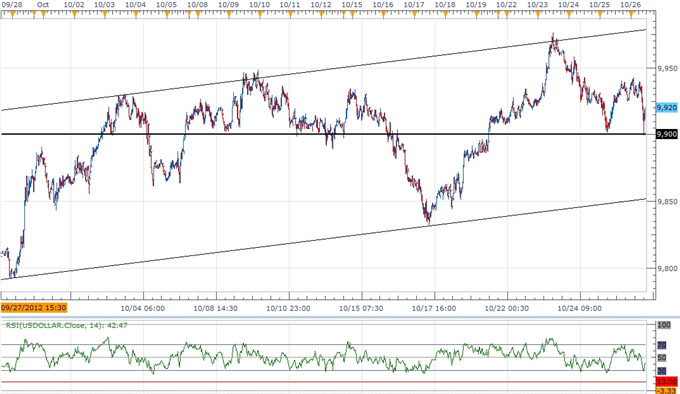 The Dow Jones-FXCM U.S. Dollar Index (Ticker: USDollar) is 0.22 percent lower from the open even as the advance 3Q U.S. GDP report exceeded market expectations, but the recent weakness in the reserve currency appears to be tapering off as the index continues to find interim support around the 9,900 figure. As the 30-minute relative strength index bounces back from oversold territory, we should see the index consolidate throughout the North American trade, and the dollar should resume the advance from earlier this month as the developments coming out of the world’s largest economy dampens the Fed’s scope to expand its balance sheet further. In turn, the bullish formation should continue to take shape over the near-term, and we should see the FOMC strike a more neutral tone for monetary policy as the recovery gets on a more sustainable path. 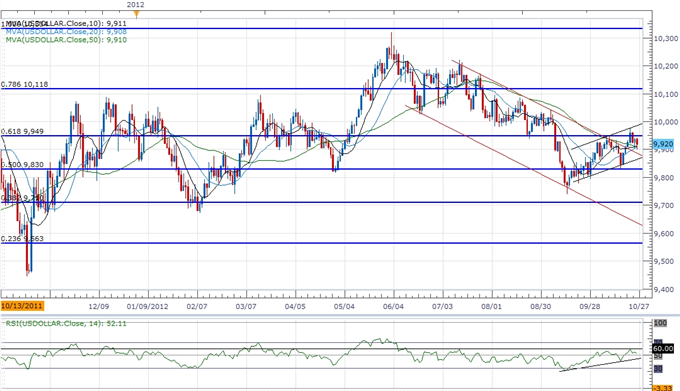 Indeed, Richmond Fed President Jeffery Lacker, the sole dissenter on the FOMC, warned that ‘further monetary stimulus now is unlikely to result in a discernible improvement in growth,’ and argued that the highly accommodative stance ‘runs the risk of raising inflation in a way that threatens the stability of inflation expectations.’ As the central bank continues to see a limited risk for a double-dip recession, a growing number of Fed officials may scale back their willingness to provide additional monetary support, and we may see the FOMC carry its wait-and-see approach into the following year as growth and inflation gradually gathers pace. As the relative strength index on the USDOLLAR preserves the upward trend carried over from the previous month, the ascending channel should continue to take shape in the week ahead, and we may see fresh monthly highs in the index as we’re expecting to see another slow of positive data coming out of the U.S.

Two of the four components weakened against the greenback, led by a 0.16 percent decline in the British Pound, but the recent weakness in the sterling is likely to be short-lived as the Bank of England softens its dovish tone for monetary policy. As the U.K. emerges from the double-dip recession, the fundamental developments on tap for the following week may continue to instill an improved outlook for the region, and GBPUSD may track higher ahead of the next BoE interest rate decision on November 8 as an increasing number of central bank officials scale back their forecast for undershooting the 2% target for inflation. As a result, we anticipate to see the Monetary Policy Committee endorse a more neutral policy stance going into 2013, and the central bank should slowly move away from its easing cycle as the Funding for Lending scheme is expected to boost private sector activity over the coming months. As the GBPUSD finds support around the 1.5900 figure, we should see the pair move back above the 23.6 percent Fibonacci retracement from the 2009 low to high around 1.6200, but the sterling may mark fresh monthly highs ahead of November as the fundamental outlook for the U.k. improves.