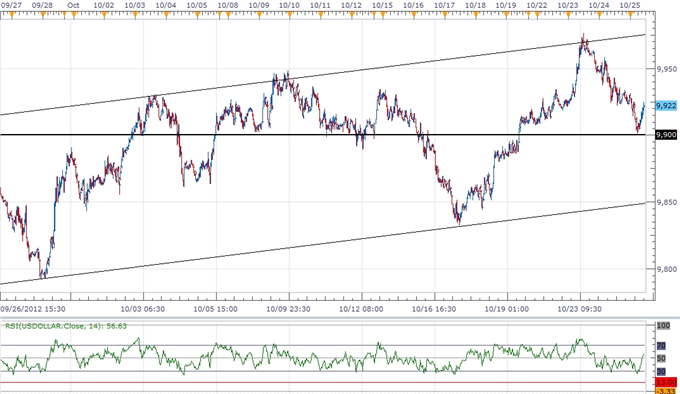 FOREX: USD To Rally On Faster Growth, JPY To Regain Appeal On BoJ

Although the Dow Jones-FXCM U.S. Dollar Index (Ticker: USDollar) is 0.07 lower from the open, the rebound in the greenback looks poised to gather pace over the next 24-hours of trading as the 30-minute relative strength index snaps back from oversold territory. As the advance 3Q GDP report is expected to show the world’s largest economy expanding at a faster pace, a positive development should produce a bullish reaction in the dollar, and we may see the greenback threaten the monthly high as market participants scale back speculation for additional monetary support. As the FOMC strikes a more neutral tone for monetary policy, we should see the bullish trend continue to pan out over the near to medium-term, and we anticipate a more meaningful move to the upside as the central bank raises its fundamental assessment for the region. 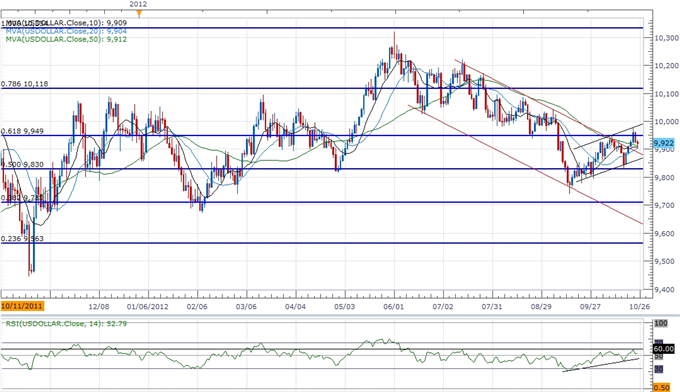 After maintaining its current policy, the FOMC continued to highlight the ongoing weakness in the labor market, but took note of the resilience in private sector consumption along with the improvements in housing. As the economy gets on a more sustainable path, a growing number of Fed officials may endorse a wait-and-see approach ahead of the December 12 meeting, and we should see the committee stick to the sidelines over the remainder of the year as policy makers see a limited risk for a double-dip recession. In turn, the ascending channel should continue to take shape in the days ahead, but we will keep a close eye on the relative strength index as it remains capped around the 60 figure.

The greenback advanced against two of the four components, led by a 0.45 percent decline in the Japanese Yen, and the low-yielding currency may face additional headwinds going into the end of the month as market participants see the Bank of Japan expanding its balance sheet further in October. Indeed, there’s growing speculation that the BoJ will increase its asset purchase program by another JPY 10Y to JPY 90T as the central bank struggles to achieve the 1 percent target for inflation, but Governor Masaaki Shirakawa may come under increased pressure to intervene on the forex market as the marked appreciation in the local currency drags on the real economy. Nevertheless, as positive real interest rates in Japan continues to prop up the Yen, we should see the BoJ continue to embark on its asset purchase program, and the recent weakness in the low-yielding currency may be short-lived as the central bank struggles to stem the threat for deflation.