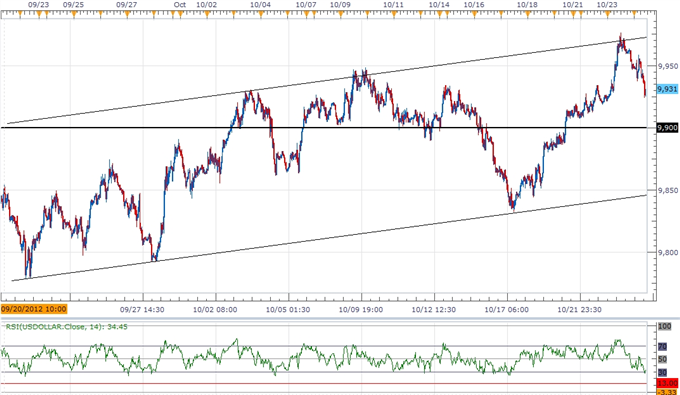 The Dow Jones-FXCM U.S. Dollar Index (Ticker: USDollar) is 0.30 percent lower from the open after moving 91 percent of its average true range, and the greenback may continue to give back the advance from earlier this month as it comes off of trendline resistance. As market participants see the FOMC preserving its dovish tone for monetary policy, speculation for more easing may spark a larger correction in the index, and the dollar may fail to hold above the 9,900 figure should the central bank show a greater willingness to expand its balance sheet further. However, we should see the dollar consolidate going into the interest rate decision as the 30-minute relative strength index approaches oversold territory, and the fresh batch of central bank rhetoric should set the tone for the remainder of the week as market participants weigh the prospects for future policy. 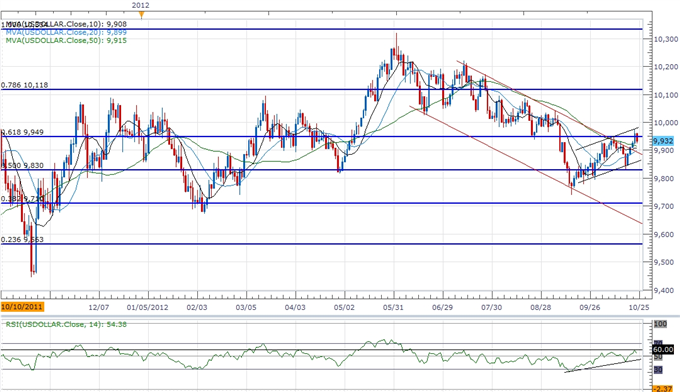 The rebound from 9,740 looks should gather pace as the index breaks out of the downward trending channel from July, but we will keep a close eye on the relative strength index as it continues to find resistance around the 60 figure. Nevertheless, the bullish trend in the oscillator remains supportive of further dollar advances as the index puts in a close above the 61.8 percent Fibonacci retracement around 9,949, and the FOMC may prompt a bullish reaction in the dollar should we see a growing number of central bank officials soften their dovish tone for monetary policy. As the world’s largest economy gets on a more sustainable path, the committee may endorse a wait-and-see approach throughout the remainder of the year, and the central bank should slowly move away from its easing cycle as the recent developments coming out of the U.S. continues to show a gradually pickup in growth and inflation. In turn, the bullish trend carried over from the previous month should continue to take shape, and we may see the index push back towards the 78.6 percent retracement around 10,118 as the fundamental outlook for the region improves.

Three of the four components advanced against the greenback, led by a 0.71 percent rally in the Australian dollar, but the rebound in the high-yielding currency may fail to gather pace as the AUDUSD remains capped by the 23.6 percent Fib from the 2010 low to the 2011 high around 1.0370. As the aussie-dollar maintains the downward trend carried over from the previous year, we should see a more pronounced downturn in the exchange rate, and the dovish tone held by the Reserve Bank of Australia should pave the way for a move back towards parity as market participants see the central bank taking additional steps to prop up the $1T economy. Although the 3Q inflation report came in stronger-than-expected, investors are still pricing additional rate cuts according to Credit Suisse overnight index swaps as RBA Governor Glenn Stevens scales back his fundamental assessment for the region. In turn, speculation for more easing should put additional downside pressures on the exchange rate, and we will maintain a bearish forecast for the AUDUSD as interest rate expectations remain weak.