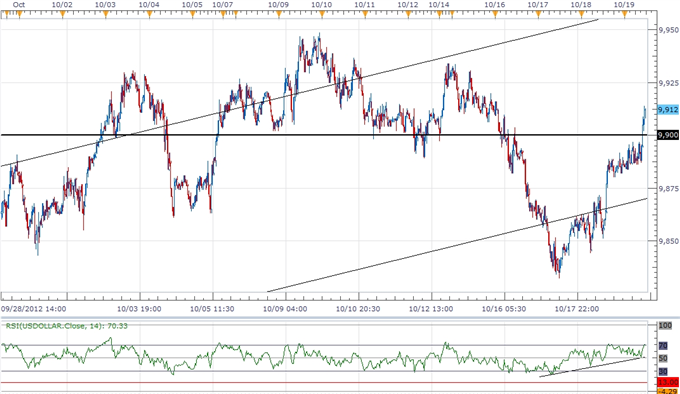 The Dow Jones-FXCM U.S. Dollar Index (Ticker: USDollar) remains 0.20 percent higher from the open after moving 63 percent of its average true range, and the greenback may appreciate further during the North American trade as currency traders scale back their appetite for risk. As the EU Summit fails to lift market sentiment, we should see the dollar continue to benefit from safe-haven flows, but we may see a small correction in the index as the 30-minute relative strength index approaches overbought territory. If the oscillator struggle to maintain the upward trend from earlier this week, we should see the reserve currency consolidate ahead of the major event scheduled for the last full week of October, but the rebound in the USDOLLAR may continue to gather pace should the fresh batch of data instill an improved outlook for the world’s largest economy. 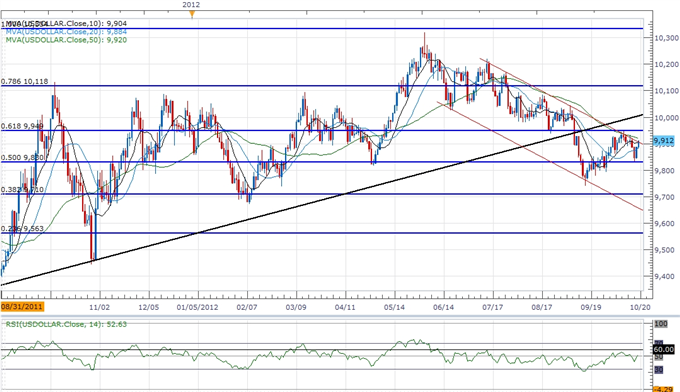 Although the preliminary 3Q GDP report is expected to show a faster rate of growth in the U.S. economy, we are likely to see the FOMC keep the door open to expand its balance sheet further as the central bank looks to encourage a stronger recovery. However, an increasing number of Fed officials may soften their dovish outlook for monetary policy as the world’s largest economy gets on a more sustainable path, and we may see the committee strike a more neutral tone as growth and inflation gradually picks up. As the USDOLLAR threatens the downward trending channel from July, a less dovish policy statement from the FOMC may provide the fundamental catalyst to spark a bullish breakout in the index, and we would like to see the dollar put in a close above the 61.8 percent Fibonacci retracement around 9,949 to encourage a bullish outlook for the reserve currency.

The greenback continued to strengthen across the board on Friday, led by a 0.37 percent decline in the Australian dollar, but we may see the high-yielding currency track higher next week as the economic docket is expected to show heightening price pressures in the $1T economy. As the headline reading for Australian inflation is projected to increase at a fastest pace in the third-quarter, a large uptick in price growth may sap speculation for additional rate cuts from the Reserve Bank of Australia, but the central bank may continue to embark on its easing cycle as Governor Glenn Stevens maintains a cautious outlook for the region. As the resource boom comes to an end, the RBA will continue to look towards the domestic economy for growth, and the central bank may show a greater willingness to lower the benchmark interest rate further in an effort to stem the downside risks surrounding the region.