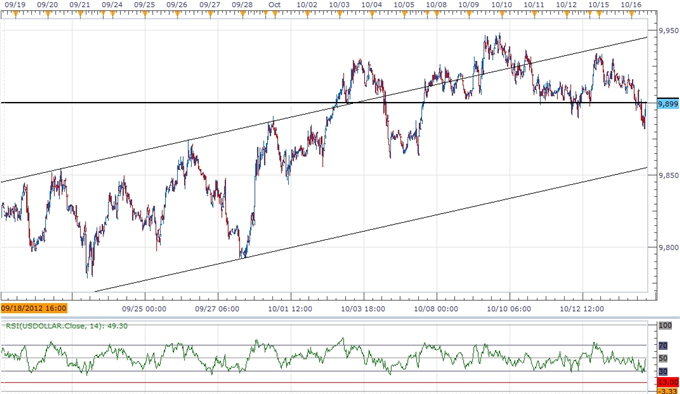 Although the Dow Jones-FXCM U.S. Dollar Index (Ticker: USDollar) remains 0.14 percent lower from the open, we’re seeing the 30-minute relative strength index come off of oversold territory, and we may see the greenback carve out a higher low going into the middle of the week as the economic docket continues to encourage an improved outlook for the world’s largest economy. As the uptick in U.S. consumer prices along with the rebound in industrial outputs dampens the argument for additional monetary support, the gradual pickup in growth and inflation may spark a greater rift within the FOMC, and we may see a growing number of Fed officials speak out against the open-ended asset purchase program as it may have a limited impact in addressing the protracted recovery in the labor market. As the index maintains the bullish trend carried over from the previous month, the series of higher highs paired with higher lows should pave the way for another run at the 9,950 figure, and greenback may continue to retrace the decline from the previous month as the fundamental outlook for the U.S. improves. 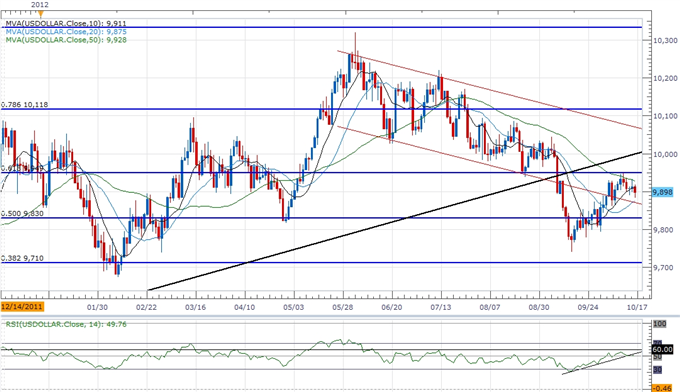 Indeed, San Francisco Fed President John Williams, who votes on the FOMC this year, reiterated his support for the new QE program, stating that it ‘is intended to be flexible and adjust to changing circumstances,’ and went onto say that the committee ‘might even expand’ its balance sheet further as the central bank looks for a stronger recovery. As the majority of the Fed continues to embark on its easing cycle, speculation for additional quantitative easing may continue to drag on the dollar, and we may see the index give back the rebound from 9,740 as the relative strength index threatens the upward trend carried over from the previous month. As the USDOLLAR fails to push back above the 61.8 percent Fibonacci retracement around 9,949, we may have a lower top on a more longer-term scale, and the bearish sentiment surrounding the reserve currency may gather pace going forward as central bank doves stand ready to provide additional stimulus.

The greenback weakened against three of the four components, led by a 0.55 percent rally in the Euro, while the British Pound gained another 0.17 percent amid the rise in risk sentiment. Nevertheless, as market participants turn their attention to the Bank of England Minutes on tap for Wednesday, the fresh batch of central bank rhetoric is likely to heavily influence the sterling over the remainder of the week, and the policy statement may instill a bullish outlook for the sterling as the central bank appears to be scaling back its forecast for undershooting the 2 percent target for inflation. In turn, the Monetary Policy Committee may sound less dovish this time around, and we may see the GBPUSD make another run at the 23.6 percent Fib from the 2009 low to high around 1.6200 as the central bank appears to be slowly moving away from its easing cycle.