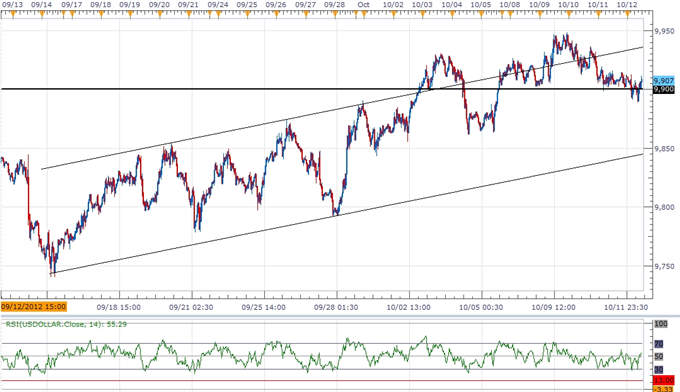 USD Forecast Propped Up By Growth Outlook- Sterling To Outperform

Although the Dow Jones-FXCM U.S. Dollar Index (Ticker: USDollar) remains flat from the open, the greenback should continue to track higher throughout the remainder of the day as the 30-minute relative strength index snaps back from oversold territory. As the index persistently carves out a series of higher highs pair with higher lows, the dollar should continue to retrace the decline from the previous month, and the short-term rebound may gather pace next week as the economic docket is expected to encourage an improved outlook for the U.S. As the U. of Michigan Confidence survey instills reflects a stronger recover in the world’s largest economy, a slew of positive developments should increase the appeal of the reserve currency, and we may see a growing number of Fed officials talk down speculation for additional monetary support as the region faces a limited risk for a double-dip recession. 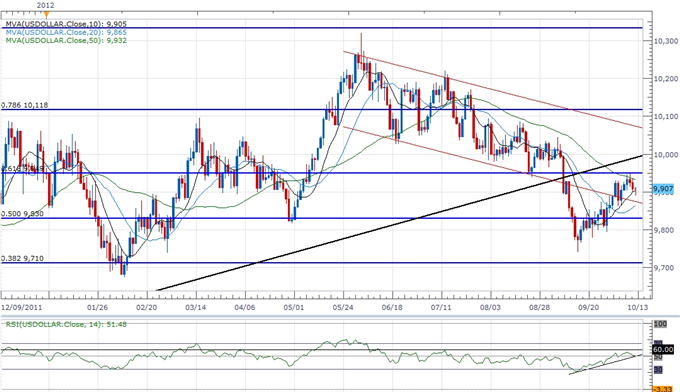 Although the USDOLLAR struggled to hold above the 10-Day SMA (9,905), we’re seeing the relative strength index find trendline support, and the rebound from 9,740 may continue to take shape as the ongoing improvement in the U.S. economy dampens the Fed’s scope to expand its balance sheet further. As Richmond Fed President Jeffrey Lacker is scheduled to speak later today, we are likely to see the lone dissenter on the FOMC continue to speak out against the open-ended asset purchase program, and Mr. Lacker may adopt a hawkish tone for monetary policy as the region gets on a more sustainable path. In turn, we are still looking for another run at 61.8 percent Fibonacci retracement around the 9,949 figure, and the key figure may finally give way in the week ahead as growth and inflation picks up.

Three of the four components advanced against the greenback, led by a 0.20 percent rally in the British Pound, and the short-term rebound in the GBPUSD should continue to gather pace as the relative strength index comes off of interim support (43). Indeed, the Bank of England Minutes highlights the biggest event risk for the following week, and the policy statement may reinforce a bullish outlook for the sterling as the central bank softens its dovish tone for monetary policy. As a growing number of BoE officials highlight the stickiness in price growth, we may see the Monetary Policy Committee scale back its forecast for undershooting the 2 percent target for inflation, and the board may raise its fundamental assessment for the U.K. as the region appears to be emerging from the double-dip recession. In turn, we may see the Pound outperform against its major counterparts, and the exchange rate may work its way back towards the 1.6300 figure should the MPC curb bets for additional monetary support.