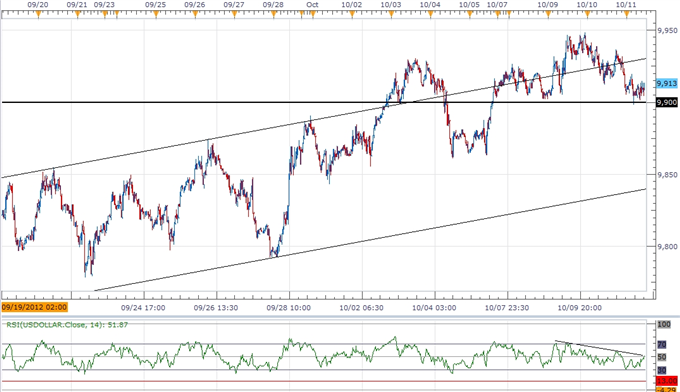 The Dow Jones-FXCM U.S. Dollar Index (Ticker: USDollar) is 0.13 percent lower from the open after moving 69 percent of its average true range, and we may see the 30-minute relative strength index threaten the bearish trend from earlier this week as the oscillator comes off of oversold territory. As the 9,900 figure continues to hold up as interim support, we should see the dollar extend the rebound carried over from the previous month, and bullish trend may gather pace over the near-term should we see a growing number of Fed officials argue against expanding the balance sheet further. As the Fed’s Beige Book instills an improved outlook for the world’s largest economy, the FOMC will find it increasingly difficult to argue for more quantitative easing, and the central bank may strike a more neutral tone for monetary policy as the recovery gradually gathers pace. 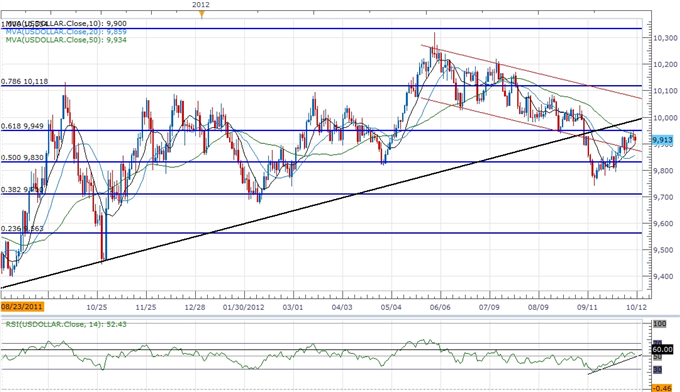 As the USDOLLAR remains capped by the 61.8 percent Fibonacci retracement around 9,949, the short-term pullback in the index may ultimately turn into a larger correction, and we will closely watching the relative strength index as it appears to be threatening the upward trend carried over from the previous month. However, as price action comes off of the 10-Day SMA (9,900), the moving average certainly appears to be providing intraday support, and the rebound from 9,740 may continue to take shape should the Fed soften its dovish tone for monetary policy. Although Fed board member Jeremy Stein argued that the ‘MBS purchases may offer a better cost-benefit profile than Treasury purchases in the current environment,’ central bank hawks may continue to dispute a further expansion in the monetary base as it raises the threat for long-term inflation.

The greenback weakened against three of the four components, led by a 0.42 percent rally in the Euro, which was followed by a 0.32 percent advance in the Australian dollar. Indeed, the upbeat jobs report coming out of the $1T economy propped up the high-yielding currency as it instills an improved outlook for growth, but the data may do little to shift the Reserve Bank of Australia’s dovish stance as Governor Glenn Stevens scales back the duration and the potential peak of the resource boom. As the central bank adopts a more dovish tone for monetary policy, we may see the RBA carry its easing cycle into the following year, and the AUDUSD should maintain the downward trend carried over from 2011 as interest rate expectations deteriorate. According to Credit Suisse overnight index swaps, market participants still see borrowing costs falling by another 75bp over the next 12-months, and the bearish sentiment surrounding the high-yielding currency may continue to gather pace as the heightening threat for a ‘hard landing’ in China – Australia’s largest trading partner – dampens the outlook for the region.