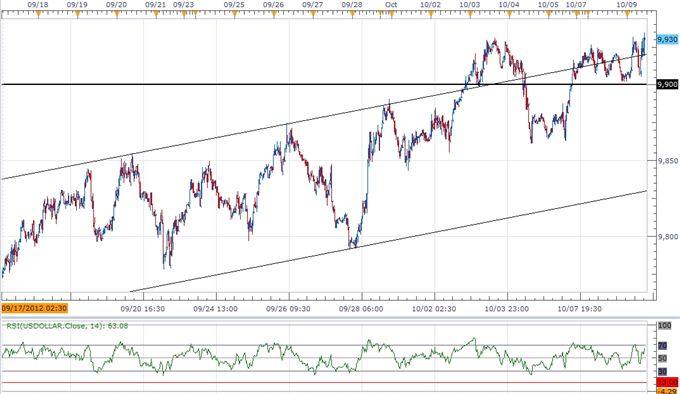 The Dow Jones-FXCM U.S. Dollar Index (Ticker: USDollar) is 0.10 percent higher from the open after moving 67 percent of its average true range, and the greenback may press higher during the North American session as the index appears to have found intraday support ahead of the 9,900 figure. As risk sentiment tapers off, the rebound in safe-haven flows should prop up the reserve currency, but we will keep a close eye on the 30-minute relative strength index as it approaches overbought territory. As the economic docket remains fairly light for the next 24-hours of trading, we should see risk trends dictate price action across the major currencies, but the fresh batch of central bank rhetoric coming out of the Federal Reserve may spark increased volatility in the dollar as market participants weigh the outlook for monetary policy. 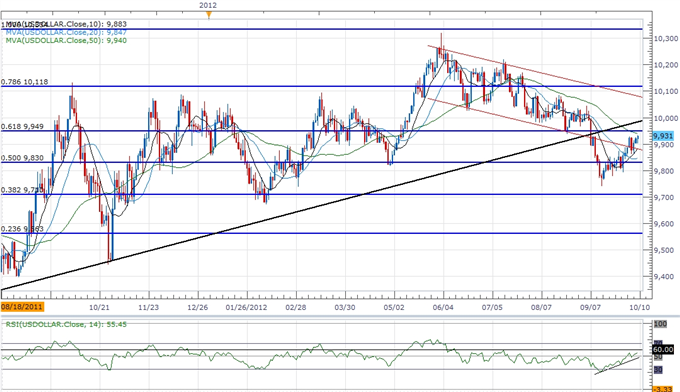 Although we anticipate FOMC voting member Janet Yellen to maintain a dovish tone for monetary policy, central bank hawks Richard Fisher and Narayana Kocherlakota may speak out against the open-ended asset purchase program as the new initiative may have a limited impact in addressing the ongoing weakness in the labor market. At the same time, the Fed’s Beige Book may dampen speculation for additional monetary support should the survey highlight stronger growth across the 12 districts, and the report may instill a bullish outlook for the USD as world’s largest economy gets on a more sustainable path. Nevertheless, we would still like to see the index trade back above the 61.8 percent Fibonacci retracement (9,949) for the rebound from 9,740 to gather pace, and the upward trend in the 10-Day SMA (9,882) may carry the index higher as it appears to be providing interim support.

The greenback advanced against two of the four components, led by a 0.56 percent decline in the Euro, while the Japanese Yen bucked the trend and rallied 0.18 percent against its U.S. counterpart. As positive real interest rates in Japan continues to prop up the Yen, the Bank of Japan is likely to face increased pressure to intervene in the currency market, but the central bank may try to verbally weaken the local currency as it continues to rely on quantitative easing to stimulate the ailing economy. However, as the USDJPY maintains the downward trend from the end of June, we may see the pair continue to give back the rebound from 77.12, and it seems as though the dollar-yen is carving out a lower top in October as it fails yet again to put in a close above the 100-Day SMA (78.77).