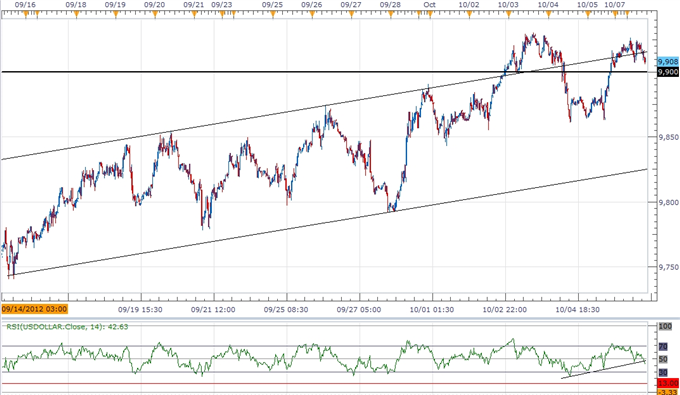 Although the Dow Jones-FXCM U.S. Dollar Index (Ticker: USDollar) remains 0.05 percent higher from the open, the dollar may continue to track lower over the next 24-hours of trading as the 30-minute relative strength index comes off of overbought territory. As the oscillator threatens the upward trend from earlier this month, the pullback from 9,931 may turn into a larger correction, and the dollar appears to be carving out a double-top in October as Fed Chairman Ben Bernanke maintain a dovish tone for monetary policy. However, as we have a slew of central bank hawks scheduled to speak this week, increased criticism surrounding the open-ended asset purchase program may increase the appeal of the USD, and the Fed’s Beige Book due out on Wednesday may instill an improved outlook for the world’s largest economy should the survey highlight a diminishing threat for a double-dip recession. 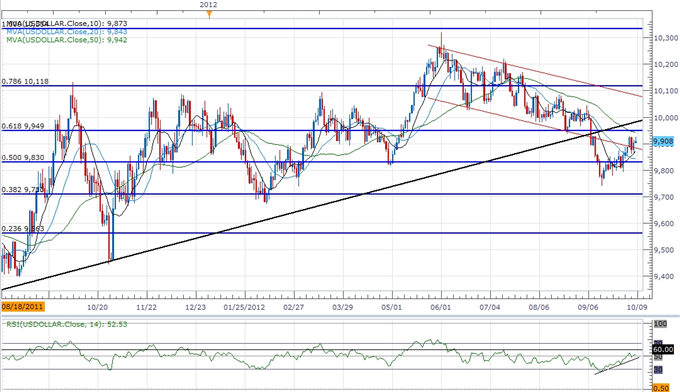 As the USDOLLAR struggles to climb back above the 61.8 percent Fibonacci retracement around 9,949, former support may come in as new resistance, and we may see the relative strength index fail to maintain the series of higher highs paired with higher lows as it remains capped around the 60 figure. Although FOMC voting member Janet Yellen pledged to shore up the ailing economy ‘through the use of all its policy tools,’ we may see a growing number of Fed officials may argue against the new quantitative easing program amid speculation that the asset purchase program will have a limited impact in encouraging a stronger recovery. Indeed, central bank hawks may argue that the ongoing expansion in the Fed’s balance sheet will ultimately raise the long-term threat inflation, and we may see an increased argument for the FOMC to slowly move away from its easing cycle as Chairman Bernanke sees a limited risk for a double-dip recession. In turn, a shift in the policy outlook should instill a bullish forecast for the USD, and the dollar may continue to make a run at the 61.8 percent Fib as the developments coming out of the world’s largest economy encourages an improved outlook for growth.

Two of the four components weakened against the greenback, led by a 0.68 percent decline in the British Pound, while the Japanese Yen regained its footing against its U.S. counterpart and rallied 0.68 percent against the dollar. As the USDJPY maintains the downward trending channel from June, we may see the pair continue to give back the rebound from 77.12, but the developments coming out of the Japanese economy may dampen the appeal of the Yen as the region faces a slowing recovery. As the Bank of Japan struggles to achieve the 1 percent target for inflation, the central bank is likely to come under increased pressure to expand monetary policy further, and Governor Masaaki Shirakawa may have little choice but to embark on the easing cycle throughout the remainder of the year in order to combat the slowing recovery. Nevertheless, as positive real interest rates in Japan props up the Yen, government officials may continue to call for a currency intervention, but it seems as though the BoJ will rely on QE to shore up the ailing economy as the central bank keeps the door open to expand its balance sheet further.