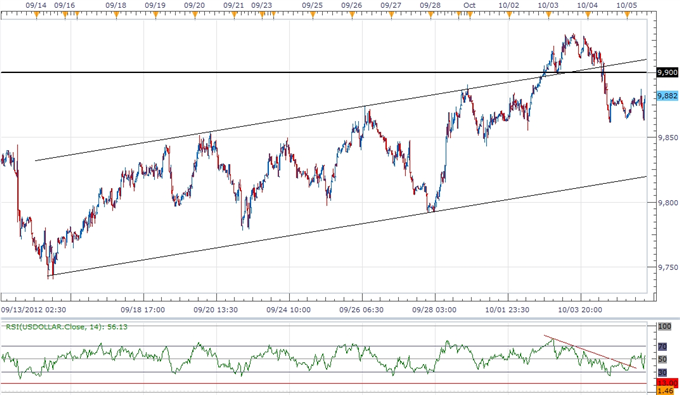 The Dow Jones-FXCM U.S. Dollar Index (Ticker: USDollar) is marginally higher on the day after moving 50 percent of its average true range, and the greenback may hold steady throughout the North American trade as market participation thins ahead of the weekend. As the 30-minute relative strength index fails to maintain the bearish trend from earlier this month, we should see the upward trending channel in the greenback continue to take shape, and the dollar looks poised for fresh monthly highs amid the series of higher lows in the index. As the RSI bounces back ahead of oversold territory, we should see the near-term rally in the USD get carried into the following week, and the reserve currency should appreciate further over the near to medium-term as we anticipate the Fed to soften its dovish tone for monetary policy. 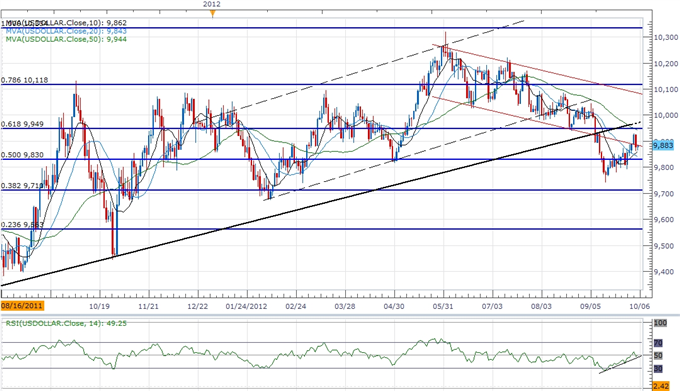 Indeed, the Non-Farm Payrolls report encourages a bullish outlook for the dollar as it limit’s the Fed’s scope to expand policy further, and we may see the FOMC endorse a neutral policy stance as the recovery gradually gathers pace. With the slew of Fed policy makers scheduled to speak next week, central bank officials may sound more upbeat towards the economy, and a shift in the policy outlook should increase the appeal of the reserve currency as Fed Chairman Ben Bernanke sees a limited risk for a double-dip recession. As the relative strength index on the daily chart preserves the upward trend carried over from the previous month, we are still looking for a move back above the 61.8 percent Fibonacci retracement around 9,949, and the Fed’s Beige Book due out on October 10 may reinforce a bullish outlook for the dollar should the survey reflect a more robust recover for the remainder of the year.

Three of the four components weakened against the greenback, led by a 0.28 percent decline in the Japanese Yen, and the low-yielding currency may face additional headwinds over the near-term as the Bank of Japan continues to embark on its easing cycle. Indeed ,BoJ Governor Masaaki Shirakawa pledged to keep a close eye on the local currency as the persistent strength in the Yen continues to drag on the real economy, and we should see the central bank expand its balance sheet further over the coming months as it continues to rely on quantitative easing to stem the downside risks surrounding the region. However, as the BoJ struggles to meet the 1 percent target for inflation, government officials may put increased pressure on the central bank to intervene in the currency market, and we should see the board carry its easing cycle into the following year amid the slowing recovery in the world’s third-largest economy.