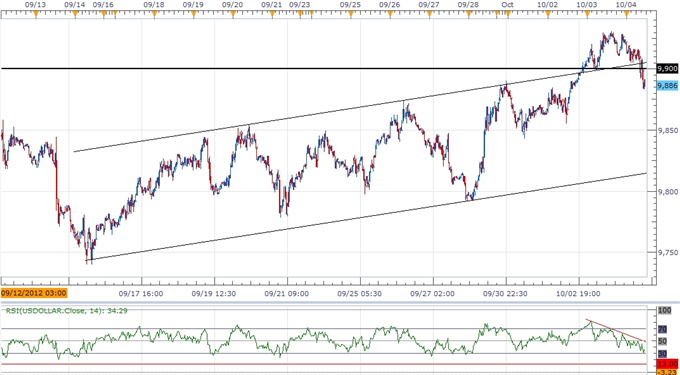 Although the Dow Jones-FXCM U.S. Dollar Index (Ticker: USDollar) remains 0.35 percent lower from the open, we’re seeing the upward trending channel carried over from the previous month continue to take shape, and the greenback looks poised for a short-term bounce as the 30-minute relative strength index bounces back from a low of 30. In turn, we may see the oscillator threaten the downward trend from earlier this week, but the FOMC Minutes on tap for later today may instill a bearish outlook for the dollar should the policy statement highlight an increased willingness to expand the balance sheet further. However, the Fed may soften its dovish tone for monetary policy as central bank officials see a limited risk for a double-dip recession, and the committee may endorse a wait-and-see approach over the near to medium-term as the economic recovery gradually gathers pace. 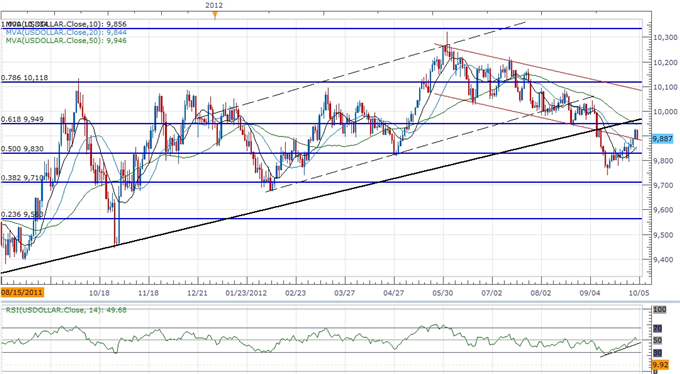 As the index trades back within the downward trending channel from June, it looks as though the dollar is finding trendline support ahead of the employment report, but we may see the rebound from 9,740 continue to gather pace should NFPs instill an improved outlook for the world’s largest economy. However, we may see a mixed reaction to the labor report as the jobless rate is expected to increase to 8.2% from 8.1% in August, but the figure may reflect discourage workers returning to the labor force as job growth is anticipated to pick up in September. As a result, the pullback in the index may serve as a buying opportunity for the dollar, and we would like to see the index put in a close above the 61.8 percent Fibonacci retracement around 9,949 to scale back the bearish forecast for the USD.

The greenback weakened against all four components, led by the 0.76 percent rally in the Euro, but the single currency remains poised to face additional headwinds over the near-term as the fundamental outlook for the region turns increasingly bleak. As Greece fails to secure the next bailout payment, Prime Minister Antonis Samaras argued that the European Central Bank should consider rolling over its Greek debt holdings, and went onto say that the European Stability Mechanism should be allowed to finance the region’s commercial banks as the region struggles to get its house in order. As the governments operating under the fixed-exchange rate system become increasingly reliant on monetary support, ECB President Mario Draghi is likely to face increased criticism, and the central bank may have little choice but to further embark on its easing cycle as the euro-area faces a deepening recession.