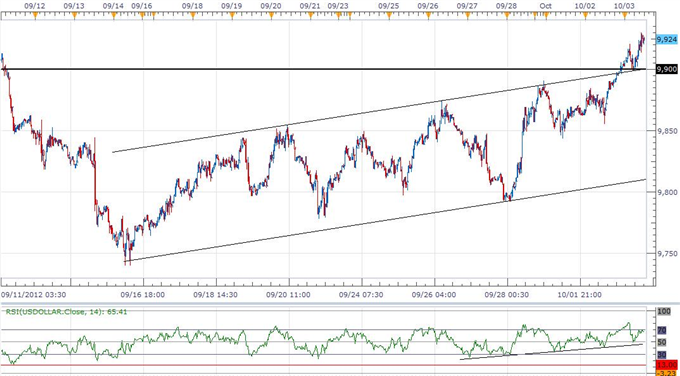 The Dow Jones-FXCM U.S. Dollar Index (Ticker: USDollar) is 0.36 percent higher from the open as the ADP Employment report and the ISM Non-Manufacturing survey exceeded market expectations, and the push back above the 9,900 figure may gather pace over the near-term as the data dampens the Fed’s scope to expand monetary policy further. Nevertheless, we may see a small pullback in the reserve currency as the 30-minute relative strength index approaches overbought territory, but we should see the dollar continue to retrace the decline from the previous month as long as the oscillator maintains the bullish trend. As market participants turn their attention to the FOMC Minutes on tap for tomorrow, we are likely to see the central bank continue to highlight the protected recovery in labor market, but the committee may strike a more neutral tone for monetary policy as Fed officials see a limited risk for a double-dip recession. 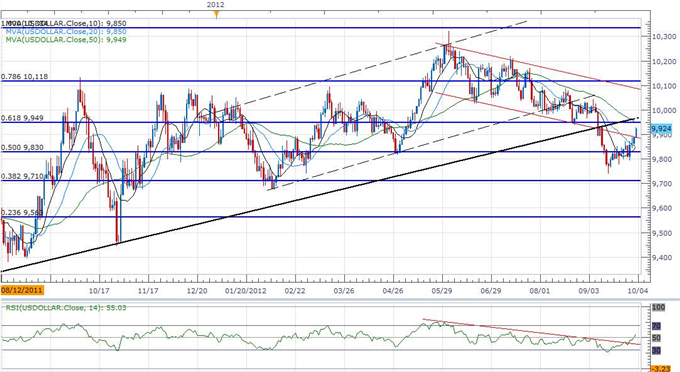 As the fresh batch of data raises the outlook for the world’s largest economy, we may see the FOMC soften its dovish tone for monetary, and the central bank may endorse a wait-and-see approach over the near-term as the recovery gradually gathers pace. At the same time, we may see a growing number of dissenting views within the Fed as the open-ended asset purchase program comes under scrutiny, and we may see the central bank preserve a wait-and-see approach over the remainder of the year as the fundamental outlook for the U.S. improves. However, as the USDOLLAR comes up against former support, the 61.8% Fibonacci retracement around 9,949, we may see the key figure now act as resistance, and we would need to see not only a less dovish Fed but also a larger-than-expected rise in U.S. Non-Farm Payrolls for the near-term rally to gather pace.

All four components weakened against the greenback, led by a 0.50 percent decline in the Japanese Yen, and the low-yielding currency may face additional headwinds over the remainder of the week as the Bank of Japan maintains its pledge to ease monetary policy further. After expanding its asset purchase program to JPT 55T last month, we should the BoJ revert back to a neutral policy stance in October, but the central bank may sound more dovish this time around as they struggle to meet the 1 percent target for inflation. In turn, the board may talk up speculation for more quantitative easing, and the central bank may continue to refrain from intervening in the currency market as positive real interest rates in Japan heightens the appeal of the Yen. As the rebound from 77.42 picks up, we may see the USDJPY make another run at the 200-Day SMA (79.29), but the pair may trade within a broad range over the near-term as market participants weigh the outlook for monetary policy.