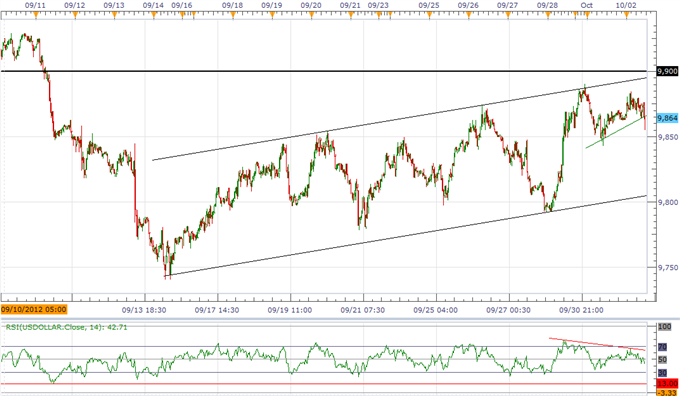 The Dow Jones-FXCM U.S. Dollar Index (Ticker: USDollar) is 0.08 percent higher from the open after moving only 48 percent of its average true range, and the greenback may continue to trade within the previous day’s range as the economic docket remains fairly light for Tuesday. As we have the FOMC Minutes coming out later this week, we may see the dollar track sideways ahead of the official statement, and the fresh remarks from the central bank should provide a clearer directional for the greenback as market participants weigh the outlook for monetary policy. However, as there appears to be a bearish divergence in the 30-minute relative strength index, the lack of momentum to push back above the 9,900 figure may threaten the upward trending channel carried over from the previous month, and the dollar may face additional headwinds over the near-term should the Fed strike a very dovish tone for monetary policy. 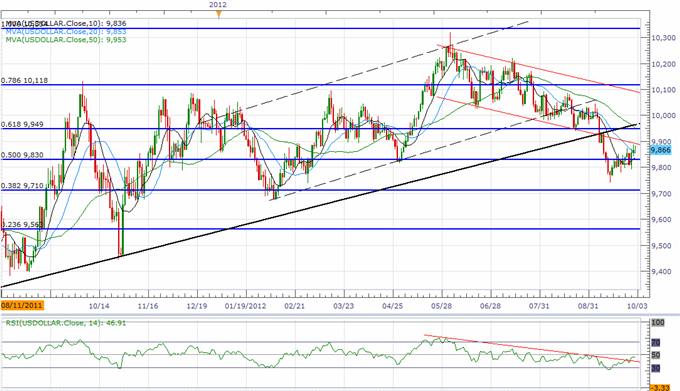 Indeed, the FOMC may continue to strike a dovish tone for future policy as Fed Chairman Ben Bernanke pledges to keep rates low even after the recovery takes hold, and it seems as though the central bank will keep the door open to expand its balance sheet further amid the ongoing weakness in the labor market. In turn, the policy statement may reinforce the bearish sentiment surrounding the dollar, and former trendline support may continue to hold up as interim resistance as the USDOLLAR struggles to push back within the descending channel from June. Nevertheless, we will be keeping a close eye on the relative strength index as it continues to break away from the downward trend, and we will need to see a less dovish Fed for the rebound from 9,740 to gather pace.

The dollar weakened against two of the four components, led by a 0.50 percent rally in the Euro, while the Australia dollar shed 0.63 percent as the Reserve Bank of Australia surprised the market and lowered the benchmark interest rate by 25bp to 3.25%. Indeed, the RBA sounding more dovish this time around as they continued to highlight the slowdown in China – Australia’s largest trading partner – and we should see the central bank continue to embark on its easing cycle as the fundamental outlook for the $1T economy deteriorates. As Governor Glenn Stevens sees a larger slowdown in the region, market participants still see the RBA cutting the cash rate by another 100bp over the next 12-months according to Credit Suisse overnight index swaps, and the recent weakness in the AUDUSD should continue to gather pace as the pair preserves the downward trend from 2011.