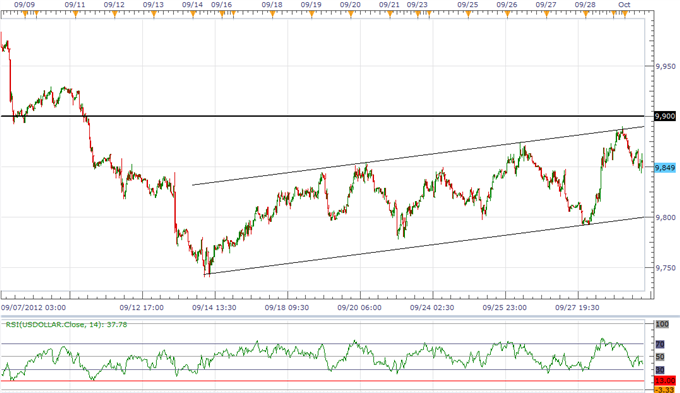 The Dow Jones-FXCM U.S. Dollar Index (Ticker: USDollar) remains 0.09 percent lower from the open after moving 91 percent of its average true range, but we should see the greenback continue to retrace the sharp decline from the previous month as the upward trending channel takes shape. As the 30-minute relative strength index bounces back ahead of oversold territory, the dollar looks poised to track higher over the next 24-hours of trading, and we may see the greenback make another run at the 9,900 figure as the developments coming out of the world’s largest economy instills an improved outlook for growth. However, as the Federal Reserve maintains a dovish tone for monetary policy, speculation for more easing may continue to dampen the appeal of the USD, and the FOMC Minutes on tap for later this week may trigger a bearish reaction in the dollar should the central bank show a greater willingness to expand the balance sheet further. 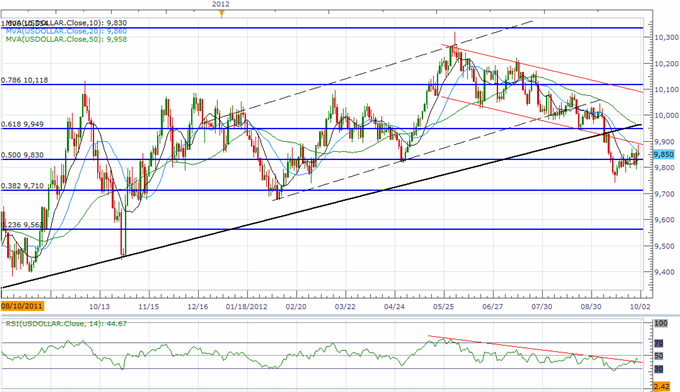 Indeed, Chicago Fed President Charles Evans argued for additional monetary support, stating that ‘there’s scope for doing more’ easing, and went onto say that it will take a year for the labor market to improve as discouraged workers continue to leave the labor force. As Fed Chairman Ben Bernanke is scheduled to speak later today, the central bank head may keep the door open to expand the balance sheet further, and we may see the USDOLLAR struggle to hold its ground as former trendline support appears to be acting as new resistance. However, as the relatives strength index breaks the downward trend from the end of May, the rebound from 9,740 should continue to gather pace, and we may see currency traders scale back their bearish sentiment for the dollar as a growing number of Fed officials speak out against the open-ended asset purchase program.

Two of the four components tracked higher against the greenback, led by a 0.47 percent rally in the Euro, while the Australian dollar gained 0.14 ahead of the Reserve Bank of Australia interest rate decision on tap for Tuesday. Although the RBA is expected to keep the benchmark interest rate at 3.50%, Governor Glenn Stevens may sound more dovish this time around as the $1T faces an uneven recovery. At the same time, the central bank head may continue to highlight the slowdown in China – Australia’s largest trading partner – as the region faces a growing risk for a ‘hard landing,’ and Mr. Stevens may show a greater willingness to lower borrowing costs further in an effort to encourage economic activity.