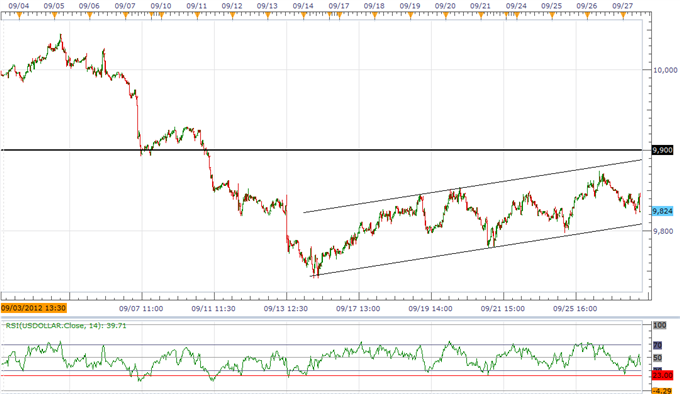 Although the Dow Jones-FXCM U.S. Dollar Index (Ticker: USDollar) remains 0.16 percent lower from the open, we’re seeing the upward trending channel from earlier this month continue to take shape, and the index looks poised to track higher over the next 24-hours of trading as the 30-minute relative strength index comes off of oversold territory. As the oscillator finds interim support around the 23 figure, we should see the dollar continue to work its way back towards 9,900, but the dismal developments coming out of the world’s largest economy may dampen the appeal of the greenback as the Fed keeps the door open to expand its balance sheet further. Nevertheless, as headlines coming out of Europe continues to sap market sentiment, the recent drop in risk-taking behavior may prop up the dollar going in October, and we anticipate to see additional USD strength as the bullish formation takes hold. 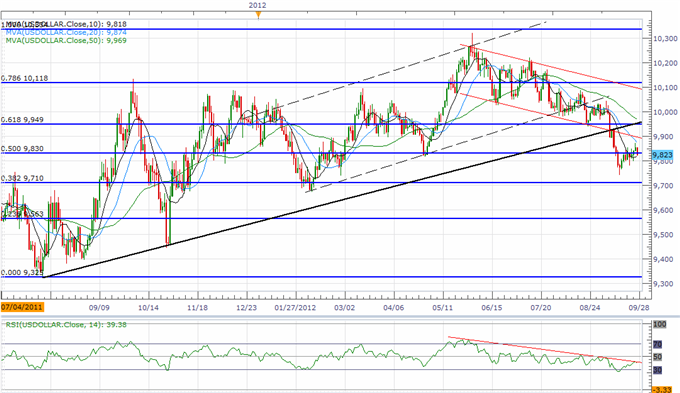 Meanwhile, Philadelphia Fed President Charles Plosser continued to speak out against the new quantitative easing program, warning that the ballooning balance sheet may complicate the FOMC’s exit strategy, and argued that the non-standard measure puts the committee’s credibility at risk should the program fail to produce a stronger recovery. At the same time, Mr. Plosser continue to highlight the risk of tying monetary policy to a specific sector of the economy, and warned that the QE3 may do more harm than good as the central bank moves into uncharted territory. As Fed officials become increasingly skeptical of the open-ended asset purchase program, we may see a growing rift within the FOMC, and Chairman Ben Bernanke may continue to rely on the transmission mechanisms to shore up the economy as policy makers look for a stronger recovery. As the Fed is expected to return to its wait-and-see approach, the shift in the policy outlook should continue to prop up the USDOLLAR, but we may see the greenback consolidate going into the end of the month as it struggles to above the 50.0 percent Fibonacci retracement around 9,830.

The greenback weakened against all four counterparts, led by a 0.67 percent rally in the Australia dollar, while the British Pound gained 0.31 percent as the final 2Q GDP report encouraged an improved outlook for the region. Indeed, market participants are still trying to call a top in the sterling following the marked appreciation from earlier this month, but the GBPUSD may continue to track higher over the near-term as the relative strength index maintains the upward trend from June. In turn, the pound-dollar may make another run at the 1.6300 figure before we finally see a short-term correction, but we will maintain a bullish outlook for the sterling as the Bank of England appears to be bringing its easing cycle to an end.