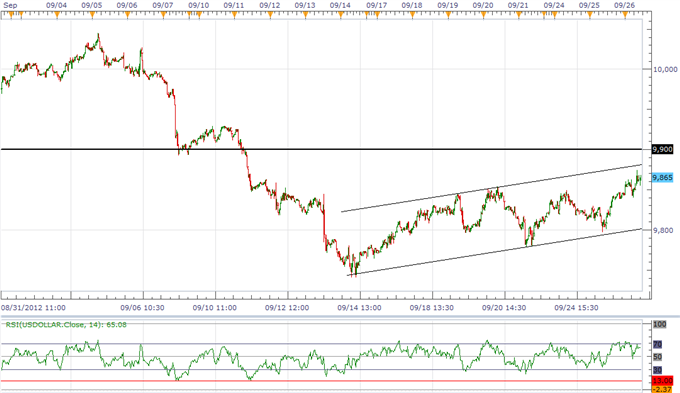 The Dow Jones-FXCM U.S. Dollar Index (Ticker: USDollar) is 0.25 percent higher from the open after moving 71 percent of its average true range, and the greenback looks poised to track higher over the remainder of the week as the upward trending channel from earlier this month continues to take shape. As the ongoing turmoil in the euro-area drags on risk-taking behavior, we should see safe-haven flows prop up the reserve currency, but the greenback may face a small correction over the next 24-hours of trading as the 30-minute relative strength index falls back from overbought territory. As the dollar appears to be carving out a bullish trend going into October, the index should continue to retrace the sharp decline from earlier this year, and the greenback may track higher over the remainder of the year as the Fed’s new quantitative easing program comes under increased scrutiny. 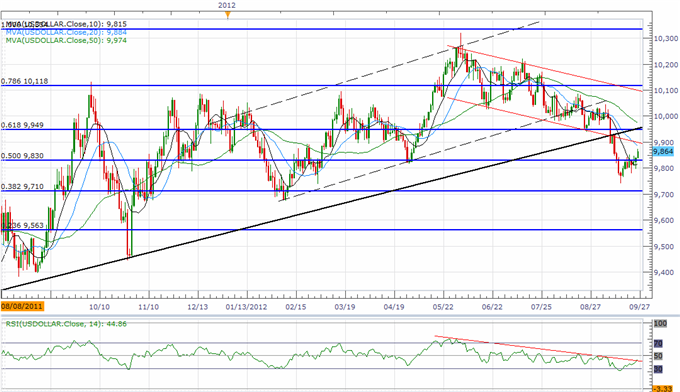 Indeed Philadelphia Fed President Charles Plosser argued that the open-ended asset purchase program puts the central bank’s credibility at risk as the new measure will do little to boost employment, and warned that the FOMC ‘will fall behind the curve’ on its mandate to ensure price stability as the expansion in the monetary base heightens the risk for inflation. As Fed officials continue to voice their opposition against the non-standard measure, we should see the committee endorse a wait-and-see approach over the near-term, and the central bank may soften its dovish tone for monetary policy as the recent developments coming out of the world’s largest economy raises the outlook for growth and inflation. As the relative strength index on the daily chart threatens the downward trend from the end of May, the rebound from 9,740, and the index may make a run at the 61.8 percent Fibonacci retracement around 9,949 as market participants scale back bets for additional monetary support.

The greenback rallied across the board, led by a 0.40 percent decline in the Australian dollar, and the high-yielding currency may track lower over the remainder of the week as risk sentiment falters. As the AUDUSD maintains the downward trend from 2011, we will maintain a bearish forecast for the pair, and the exchange rate looks poised to give back the rebound from 1.0163 as it carves out a double-top in September. As market participants turn their attention to the Reserve Bank of Australia interest rate decision scheduled for October 2, the policy meeting will certainly have a major impact on future price action, and Governor Glenn Stevens may sound increasingly dovish this time around as the fundamental outlook for the region deteriorates.