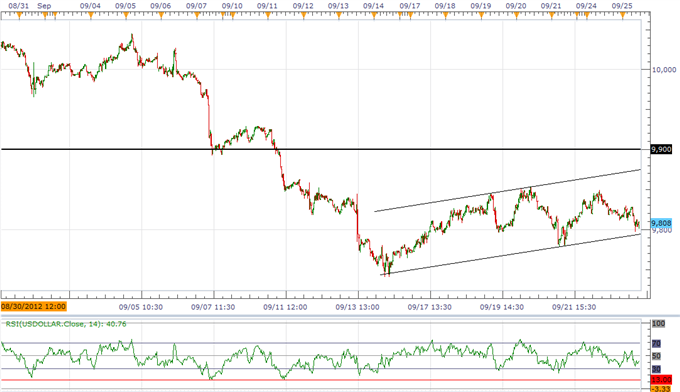 Although the Dow Jones-FXCM U.S. Dollar Index (Ticker: USDollar) remains 0.21 percent lower from the open, the recent weakness in the greenback may be short-lived as the reserve currency maintains the upward trending channel from earlier this month. As the 30-minute relative strength index bounces back ahead of oversold territory, the rebound from the September low (9,740) looks poised to gather pace, but the dollar may struggle to hold its ground should Fed officials continue to strike a highly dovish tone for monetary policy. As the FOMC continues to embark on its easing cycle, the bearish sentiment surrounding the U.S. dollar may gather pace ahead of the October 24 meeting, but we may see the central bank strike an improved outlook for the region as the recovery gradually gathers pace. 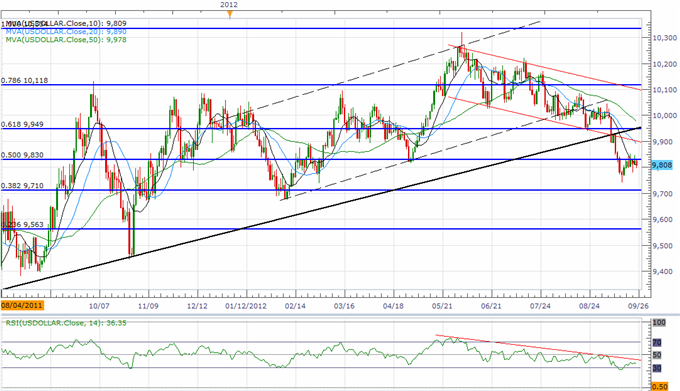 Although the slew of positive developments coming of the world’s largest economy fueled risk-appetite, the data certainly dampens the Fed’s scope to ease monetary policy further, and the central bank may strike a more neutral tone for monetary policy as the new quantitative easing program gets underway. However, as central bank dove Charles Evans is scheduled to speak later today, the Chicago Fed President may talk up speculation for additional monetary support, and the fresh batch of central bank rhetoric may heighten the bearish sentiment surrounding the dollar as the FOMC keeps the door open to expand its balance sheet further. As the relative strength index on the daily chart maintains the downward trend from the end of May, we will look for further declines over the near-term, and we would need to see a bullish breakout in the oscillator to flip our near-term bias on the greenback.

Three of the four components advanced against the greenback, led by a 0.32 percent advance in the Australian dollar, but the high-yielding currency may come under pressure over the remainder of the week should the central bank show a greater willingness to lower the benchmark interest rate further. Indeed, the Reserve Bank of Australia is scheduled to release its Financial Stability Review later tonight, and the central bank may continue to highlight the slowdown in China – Australia’s largest trading partner – as the region faces a growing risk for a ‘hard landing.’ As the RBA is scheduled to convene next week, market participants are pricing an 68 percent chance for a 25bp rate cut according to Credit Suisse overnight index swaps, and we may see the central bank carry its easing cycle into the following year as the region continues to face an uneven recovery.