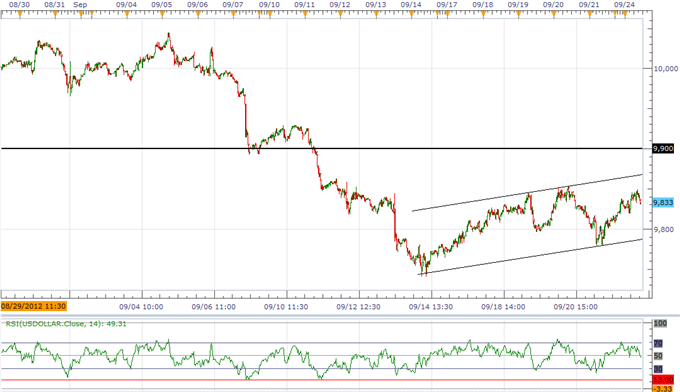 The Dow Jones-FXCM U.S. Dollar Index (Ticker: USDollar) remains 0.18 percent higher from the open after moving 79 percent of its average true range, and the drop in market sentiment may prop up the reserve currency throughout the North American trade as it benefits from safe-haven flows. As negative headlines coming out of Europe continues to sap risk-taking behavior, the dollar may continue to retrace the sharp decline from earlier this month, but we may see the dollar consolidate over the next 24-hours of trading as the 30-minute relative strength index falls back from overbought territory. Nevertheless, the short-term rebound in the USDOLLAR looks poised to gather pace as the index craves out an upward trending channel, and the greenback may track higher in the month ahead as the fundamental developments coming out of the world’s largest economy encourages an improved outlook for growth and inflation. 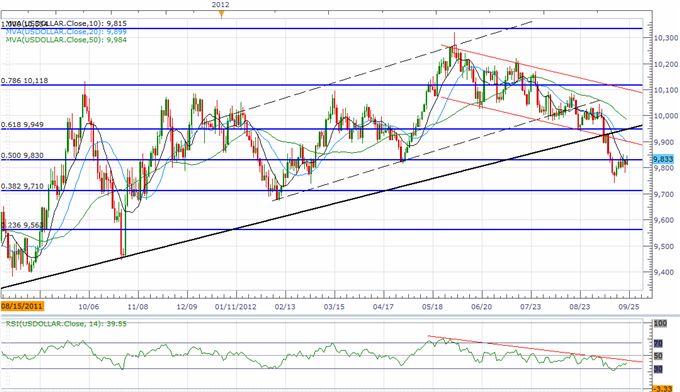 Although the 30-minute chart encourages a bullish forecast for the dollar, the daily chart continues to reflect a weakened outlook for the greenback as the relative strength index maintains the downward trend carried over from May. As San Francisco Fed President John Williams, who also serves on the FOMC this year, is scheduled to speak later today, the fresh batch of central bank rhetoric may sway the greenback later today, and the dollar may face additional headwinds over the near-term should the committee show a greater willingness to expand monetary policy further. As the USDOLLAR struggles to hold above the 50.0 percent Fibonacci retracement around the 9,830 figure, the rebound from 9,740 certainly appears to be tapering off, but we may see the greenback continue to recoup the losses from earlier this month should Mr. Williams talk down speculation for additional monetary support.

The greenback advanced against three of the four components, led by the 0.53 percent decline in the Euro, while the Japanese Yen rallied 0.33 percent even as the Bank of Japan increased its pledge to tackle the marked appreciation in the local currency as it continues to undermine the scope for export-led recovery. Indeed, BoJ Deputy Governor Hirohide Yamaguchi said the central bank will ‘take flexible and bold steps’ as it struggles to achieve the 1 percent target for inflation, but went onto say that the board ‘has no intention of using its policy to directly influence foreign exchange rates’ as it continues to rely on its asset purchase program. In turn, it seems as though the BoJ will continue to expand its balance sheet over the medium-term, but the central bank may come under increased pressure to intervene in the foreign exchange market as persistent strength in the local currency continues to dampen the outlook for growth.