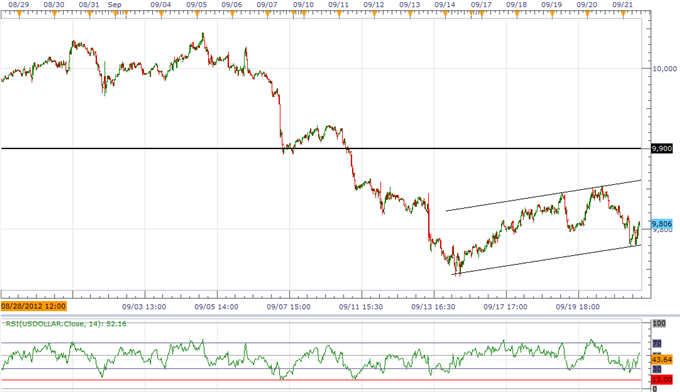 Although the Dow Jones-FXCM U.S. Dollar Index (Ticker: USDollar) remains 0.20 percent lower from the open, the greenback appears to be trading within an upward trending channel, and the reserve currency may continue to retrace the pullback from 9,855 as the 30-minute relative strength index bounces back from oversold territory. As the economic docket remains fairly light for the remainder of the day, a further drop in risk sentiment should prop up the USD, but the dollar may struggle to hold its ground should Fed officials continue to strike a dovish tone for monetary policy. As central bank dove Dennis Lockhart, who serves on the FOMC this year, is scheduled to speak on monetary policy later today, the Atlanta Fed President may endorse the new quantitative easing program amid the ongoing slack in the labor market, and Mr. Lockhart may talk up speculation for additional monetary support as the committee aims to encourage a stronger recovery. 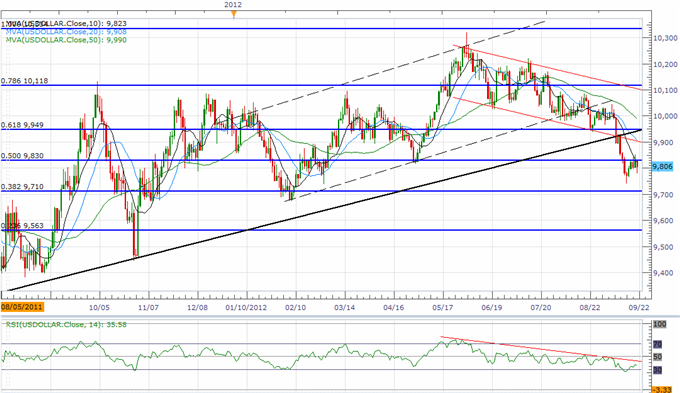 Indeed, we’ve been seeing a growing number of Fed officials retain a dovish tone for monetary policy, with Minneapolis Fed President Narayana Kocherlakota stating that the benchmark interest rate should stay near zero ‘until the unemployment rate has fallen below 5.5 percent,’ and it seems as though the central bank will keep the door open to expand policy further amid the ongoing turmoil in the world economy. Indeed, the daily chart fosters a bearish outlook for the dollar as the index struggles to hold above the 50.0 percent Fibonacci retracement around the 9,830 figure, and we will need to see the relative strength index break the downward trend from May to see the short-term rebound turn into a larger correction. However, as the economic docket for the following week is expected to highlight a slowing recovery in the U.S., a slew of dismal developments may heighten speculation for more easing, and we may see the greenback extend the decline from June as the Fed continues to embark on its easing cycle.

All four components gained ground against the USD, led by a 0.34 percent rally in the Australian dollar, while the British Pound gained 0.20 percent even as the U.K. saw a record GBP 14.4B budget deficit in August. It seems as though the Bank of England is becoming upbeat towards the economy as the Funding for Lending scheme is expected to boost private sector activity, and we may see the Monetary Policy Committee slowly move away from its easing cycle as the region appears to be emerging from the double-dip recession. As the BoE sticks to the sidelines, the shift in the policy outlook may continue to push the exchange rate higher, and the short-term rally may get carried into the following week as the relative strength index pushes deeper into overbought territory. Although market participants are looking for a short-term pullback in the GBPUSD, we need to see the RSI fall back below 70 for a correction to take shape.