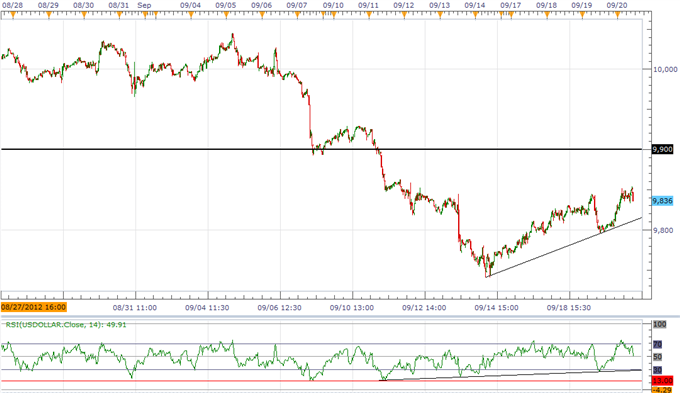 The Dow Jones-FXCM U.S. Dollar Index (Ticker: USDollar) remains 0.31 percent higher from the open after moving 98 percent of its average true range, and the greenback may track higher over the remainder of the week as fears surrounding the global economy drags on trader confidence. As the 30-minute relative strength index maintains the upward trend from earlier this month, the rebound from 9,740 looks poised to gather pace over the next 24-hours of trading, but we may see a small pullback before a move towards the 9,900 figure as the oscillator approaches overbought territory. Although the economic docket remains fairly light for the remainder of the week, we have Fed officials scheduled to speak over the next 24-hours of trading, and the fresh batch of central bank rhetoric may spark increased volatility in the USD as market participants weigh the outlook for monetary policy.

Despite the positive developments coming out of the world’s largest economy, Boston Fed President Eric Rosengren argued that the new asset purchase program will help to prevent permanent ‘scarring’ in the labor market, while Atlanta Fed President Dennis Lockhart, who serves on the FOMC this year, said ‘the state of employment here and now and the immediate outlook for jobs is front of mind for me and my colleagues’ as discouraged workers continue to leave the labor force. It seems as though the Fed will keep the door open to expand its balance sheet further amid the persistent slack in the real economy, but it seems as though the FOMC will maintain its current policy over the coming months as the recovery gradually gathers pace.

As the USDOLLAR pushes back above the 50.0 percent Fibonacci retracement around the 9,830 figure, we may see the index threaten former trendline support (9,900), but we would like to see the relative strength index break the downward trend from May to see the rebound from 9,740 turn into a larger correction. However, we may see the RSI preserve the bearish trend should former trendline support act as new resistance, and the dollar may continue to give back the advance from earlier this year as the FOMC continues to embark on its easing cycle.

Three of the four components weakened against the greenback, led by a 0.69 percent decline in the Euro, while the Australian dollar shed 0.67 percent as manufacturing in China – Australia’s largest trading partner – continued to contract in September. At the same time, the International Monetary Fund argued that ‘the Reserve Bank has the scope to lower interest rates and loosen monetary conditions to help buffer against a downside scenario,’ and warned that the high-yielding currency is ‘stronger than would be consistent’ with the fundamental outlook for the region as the $1T economy continues to face an uneven recovery. As the AUDUSD maintains the downward trend from 2011, we will preserve our bearish forecast for the pair, and aussie-dollar may ultimately give back the rebound from earlier this year as interest rate expectations deteriorate.