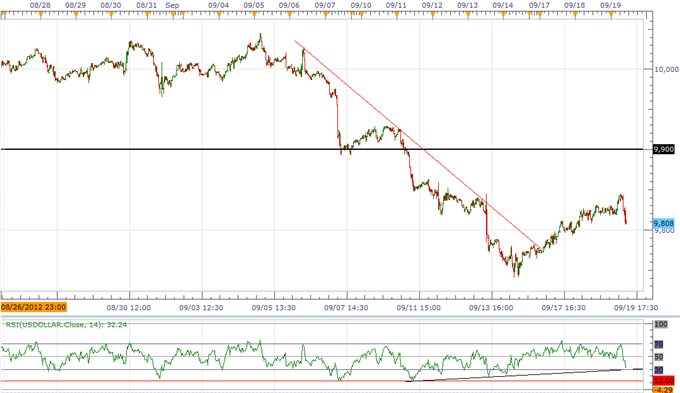 The Dow Jones-FXCM U.S. Dollar Index (Ticker: USDollar) is 0.07 percent lower from the open after moving 58 percent of its average true range, and we may see the greenback threaten the upward trend in the 30-minute relative strength index as market participants ramp up their appetite for risk. Although the 7.8% rise in U.S. Existing Home Sales has helped to prop up trader sentiment, the ongoing improvement in the world’s largest economy certainly dampens the Fed’s scope to expand its balance sheet further, and we may see the central bank start changing its tune as the recovery gradually gathers pace. As there appears to be mixed views surrounding the new asset purchase program, we may see the FOMC stick to the sidelines over the remainder of the year, and Fed Chairman Ben Bernanke may sound more upbeat over the near-term as growth and inflation picks up. 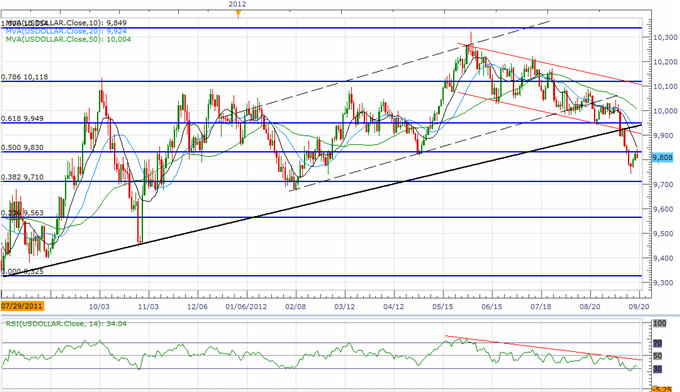 Although Chicago Fed President Charles Evans argued that the expansion in the central bank’s balance sheet will help the U.S. economy to be more resilient, Richmond Fed President Jeffrey continued to oppose the new measure, stating that the expansion in the monetary base is raising the threat for inflation. At the same time, Mr. Lacker warned that the open-ended program may do little to foster a major improvement in the labor market, and we may see the new round of quantitative easing come under increased criticism as policy makers see a limited risk for a double-dip recession.

As we have more Fed hawks speaking over the coming days, we may see an increasing number of central bank officials soften their dovish tone for monetary policy, and we may see the bearish sentiment surrounding the USD taper off as market participants scale back bets for more easing.

Nevertheless, as the USDOLLAR struggles to hold above the 50.0 percent Fibonacci retracement around the 9,830 figure, we may see the index consolidate over the remainder of the week, but we will keep a close eye on the relative strength index as it bounces back from oversold territory. Should Fed officials talk down bets for additional monetary support, we may see the oscillator threaten the downward trend from May, but the rebound in the RSI may be short-lived should market sentiment continue to pick up.

The greenback weakened against two of the four components, led by a 0.62 percent advance in the Japanese Yen, and the low-yielding currency may continue to appreciate against its U.S. counterpart as global investors continue to favor positive real interest rates in Japan. Although the Bank of Japan expanded its asset purchase program to JPY 55T, the low-yielding environment has certainly increased the appeal of the Yen, and we should see the central bank continue to embark on its easing cycle as it struggles to achieve the 1 percent target for inflation. In turn, the Japanese government may put increased pressure on the BoJ to intervene in the currency market, but the central bank may continue to rely on its QE program as it aims to encourage a stronger recovery.