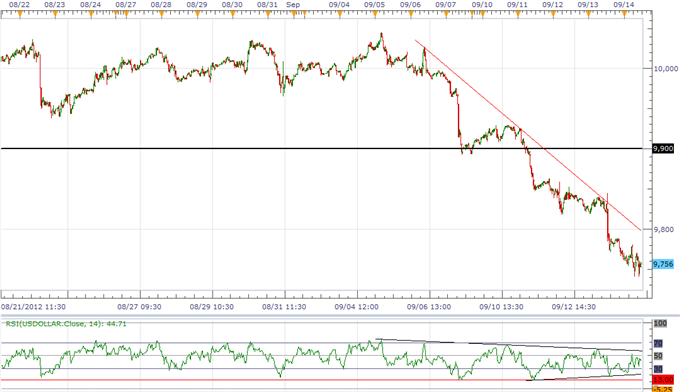 USD To Consolidate With Fed Hawks On Tap, JPY At Risk On BoJ Policy

The Dow Jones-FXCM U.S. Dollar Index (Ticker: USDollar) is trading 0.29 percent lower from the open after moving 99 percent of its average true range, and the dollar may continue to lose ground during the North American trade as the FOMC Interest Rate Decision continues to fuel risk-taking behavior. As the Fed takes additional steps to encourage a stronger recovery, the expansion in the monetary base certainly reinforces a bearish outlook for the greenback, but we may see the dollar consolidate in the week ahead as a wedge formation appears to be taking shape in the 30-minute relative strength index. As the oscillator continues to come off of support around the 13 figure, we may see a short-term correction unfold next week, and the index may work its way back towards the 9,800, which would threaten the downward trendline from earlier this month. 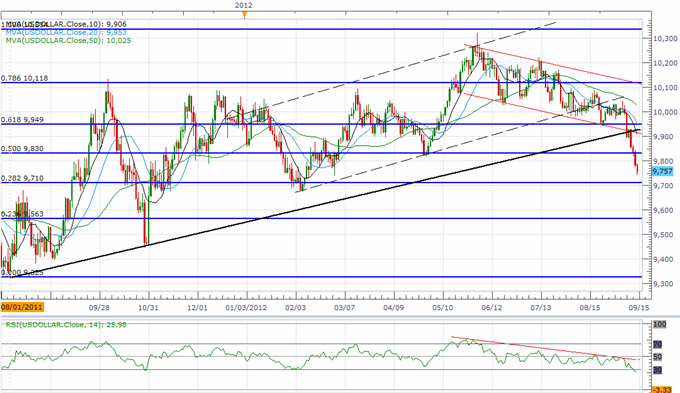 Although the slew of positive developments coming out of the U.S. economy propped up risk-sentiment, the data suggests that the economic recovery is still gradually gathering pace, and the economic docket on tap for next week may further instill an improved outlook for the U.S. as the housing market starts to pick up. In turn, Fed officials may sound more upbeat going forward, and we may see a growing rift within the central bank as the region continues to face a limited risk for a double-dip recession. As we have Fed hawks scheduled to speak next week, we may see mixed views surrounding the new asset purchase program, and a growing number of central bank officials may voice their dissent against the expansion in the monetary base as growth and inflation picks up. In turn, we may see the USDOLLAR holds above the 38.2 percent Fibonacci retracement around the 9,710 figure, but we will be keeping a close eye on the relative strength index as it dips into oversold territory. Indeed, the oscillator needs to move back above 30 to see a meaningful correction in the index, but the greenback may face additional headwinds over the near-term as risk-trends continue to dictate price action in the currency market.

The greenback weakened against three of the four components, led by a 1.16 percent rally in the Euro, while the Japanese Yen bucked the trend as market participants raised their appetite for risk. As market participants turn their attention to the Bank of Japan interest rate decision scheduled for the following week, there’s growing speculation that the central bank will act this month amid the persistent strength in the local currency, and Governor Masaaki Shirakawa may come under increased pressure to intervene in the FX market as Finance Minister Jun Azumi pledges to take ‘decisive action’ to address the downside risks surrounding the region. However, the BoJ may opt to expand its balance sheet further as it struggles to achieve the 1 percent target for inflation, and we should see the central bank continue to carry out its easing cycle throughout the second-half of the year amid the ongoing threat for deflation.