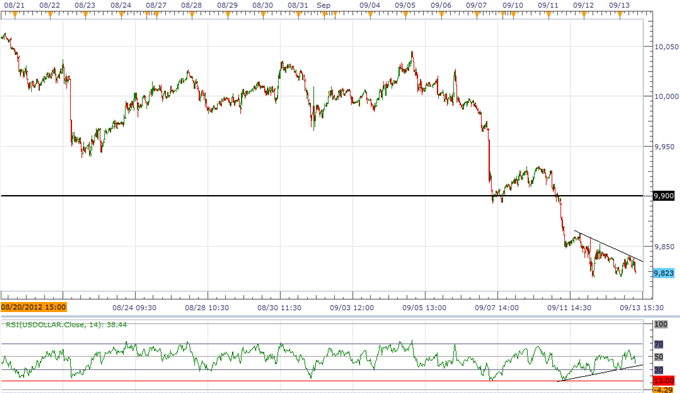 Although the Dow Jones-FXCM U.S. Dollar Index (Ticker: USDollar) is trading 0.06 percent lower from the open, the FOMC interest rate decision will certainly have large implications for the reserve currency, and the outcome could set the tone for the remainder of the month as market participants weigh the outlook for monetary policy. Indeed, bets for more easing has dragged on the dollar as the central bank shows a greater willingness to expand the balance sheet further, but we may see the index consolidate going into the rate decision amid the mixed views surrounding the policy meeting. Nevertheless, we’ll be keeping a close eye on the 30-minute relative strength index as a bullish divergence appears to be taking shape, and we will need a more upbeat Fed to see a meaningful rebound in the dollar. 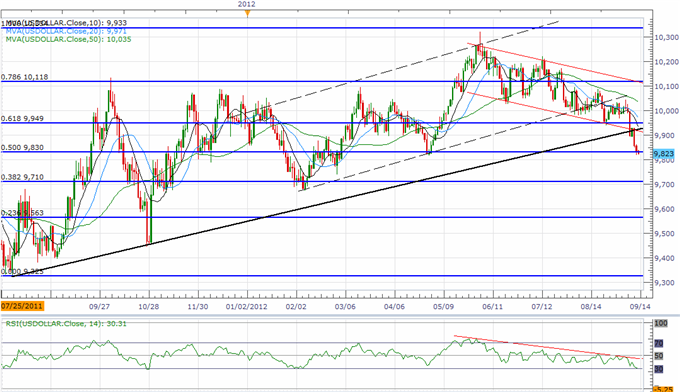 Indeed, speculation for another round of quantitative easing along with bets for an extension of the interest rate guidance has pushed the USDOLLAR below the 50.0 percent Fibonacci retracement around the 9,830 figure, but the recent weakness may be short-lived as the relative strength index flirts with oversold territory. Although market participants anticipate a major development today, we may see the FOMC merely push out its zero-interest rate policy (ZIRP) pledge to 2015 as the committee continues to relay on its transmission mechanism. Indeed, the Fed may save its ammunition amid the ongoing turmoil in the world economy, and the central bank may keep the door open to expand its balance sheet further in an effort to strengthen the recovery. In turn, we may see the 50.0 percent retracement hold up as near-term support, and we should see a sharp rebound in the index should the FOMC rate decision disappoint. In contrast, a QE3 announcement paired with an extended ZIRP pledge may heighten the bearish sentiment surrounding the dollar, and we may see the index work its way back towards the 38.2 percent Fib should the central bank sound increasingly dovish.

Three of the four components advanced against the dollar, led by a 0.53 percent rally in the Japanese Yen, while the Australian dollar bucked the trend and shed 0.12 percent despite the rise in market sentiment. Indeed, the Reserve Bank of Australia’s quarterly bulletin warned that the ‘forecasts derived from the capital expenditure survey must be interpreted with a fair degree of caution’ as ‘data have tended to overpredict the upswing in mining investment over the past two years,’ and we should see the central bank continue to embark on its easing cycle as China – Australia’s largest trading partner – faces an increased threat for a ‘hard landing.’ As the AUDUSD maintains the downward trend carried over from 2011, we will preserve our bearish forecast for the pair, and the aussie-dollar is likely to face additional headwinds over the near-term as market participants anticipate to see lower borrowing costs over the coming months.