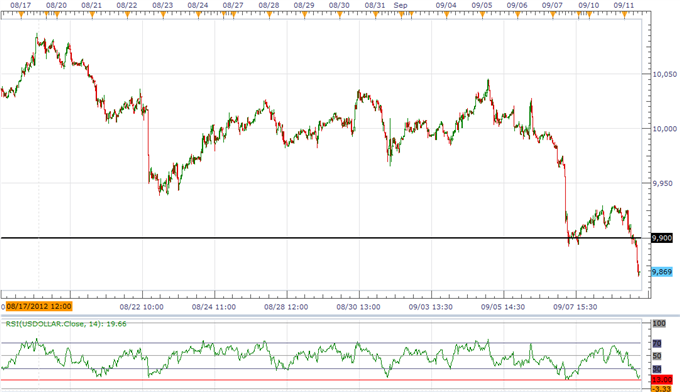 The Dow Jones-FXCM U.S. Dollar Index (Ticker: USDollar) is 0.60 percent lower from the open after moving 138 percent of its average true range, and the rise in risk-taking behavior may gather pace over the coming days as European policy makers see Germany’s Constitutional Court ruling in favor of the European Stability Mechanism. As that paves the way for the European Central Bank to implement its sterilized, unlimited bond buying program, speculation for a major announcement at the October 4 meeting may continue to prop up investor confidence, but we may see the dollar consolidate going into the middle of the week as the FOMC interest rate decision comes into focus. As the 30-minute relative strength index falls back into oversold territory, it the 13 figure once again for support, but we will need to see the RSI push back above 30 to see a short-term correction take shape. 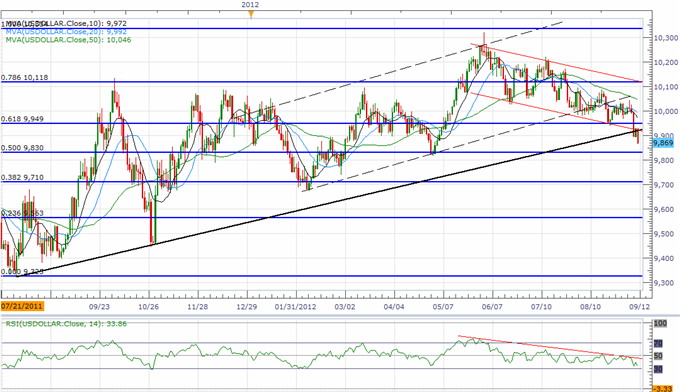 Indeed, Moody’s Investor Services fired warning shots against the U.S. and said the world’s largest economy may face a credit-rating downgrade as the government struggles to address the ‘fiscal cliff.’ In turn, the rating agency warned that they ‘would then need evidence that the economy could rebound from the shock before it would consider returning to a stable outlook,’ and the uncertainties surrounding the fundamental outlook may continue to dampen the appeal of the greenback as the region faces a slowing recovery. There’s growing speculation that the FOMC will expand its balance sheet further at the meeting scheduled for Thursday, but the rate decision may disappoint should the central bank merely extend its zero-interest rate policy (ZIRP) pledge in September. As the USDOLLAR breaks the upward trend carried over from 2011, we’re watching the 50.0 percent Fibonacci retracement around 9,830 for interim support, but we will be keeping a close eye on the relative strength index as it approaches oversold territory.

The dollar weakened against all four counterparts, led by a 0.90 rally in the Australian dollar, while the Japanese Yen climbed 0.57 percent as currency traders diversified away from the reserve currency. As the USDJPY slips to a fresh monthly low of 77.74, the Bank of Japan may come under increased pressure to stem the persistent strength in the local currency, and we should see the central bank continue to embark on its easing cycle as the region struggles to curb the threat for deflation. Although market participants are still calling for a currency intervention, it seems as though the BoJ will continue to rely on its asset purchase program to stimulate the ailing economy as it aims to encourage a sustainable recovery.