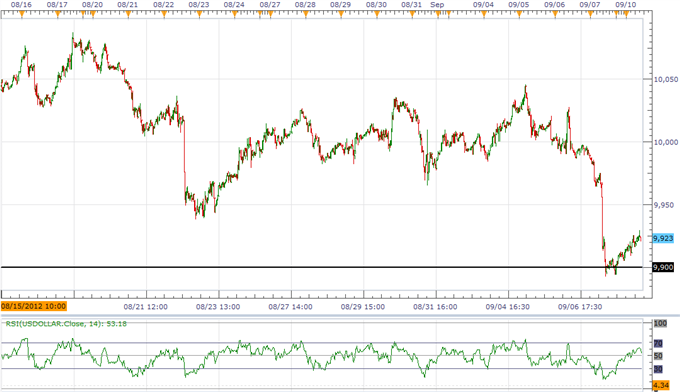 The Dow Jones-FXCM U.S. Dollar Index (Ticker: USDollar) is 0.22 percent higher from the open after moving 53 percent of its average true range, and the greenback may continue to retrace the sharp selloff from Friday as currency traders scale back their appetite for risk. However, as the Federal Open Market Committee interest rate decision highlights the biggest event risk for this week, we may see the dollar consolidate going into the policy meeting, and there’s growing speculation that the central bank will announce another round of quantitative easing in an effort to tackle the slowing recovery. In turn, the rebound in the USDOLLAR may be short-lived, and the greenback may struggle to hold its ground over the coming days as Fed officials show a greater willingness to expand the balance sheet further. As a result, we may see the index carve out a lower top going into the middle of the week, but we may see a sharp rebound in the reserve currency should the rate decision disappoint. 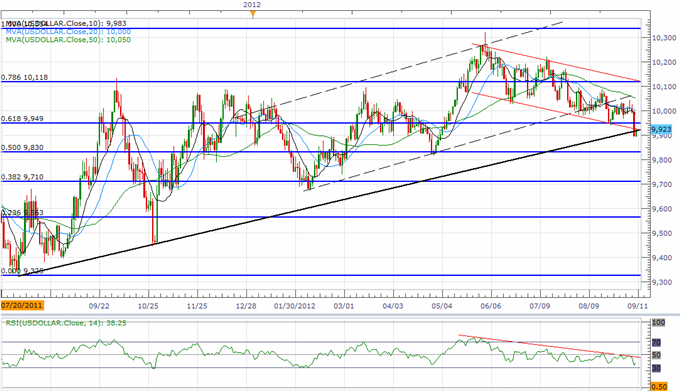 Although we’re seeing increased arguments for QE3, there’s also speculation that the FOMC will extend its zero-interest rate policy (ZIRP) pledge as the committee continues to rely on its transmission mechanisms to stem the ongoing slack in the real economy. Indeed, we may see the Fed refrain from expanding its balance sheet further as there remains a limited risk for a double-dip recession, but the central bank may sound more cautious this time around amid the persistent weakness in the labor market. As the participation rate slips to the lowest level since 1981, the threat of a higher rate of ‘natural’ unemployment may generate a very dovish statement, and we may see central bank officials may lower their interest rate outlook as the ongoing turmoil in the world economy dampens the outlook for stronger growth. In turn, the bearish formation from June may continue to take shape, but we will be keeping a close eye on the relative strength index as it approaches oversold territory. Indeed, we would need to see the Fed move away from its easing cycle to see the dollar reverse course, but another round of easing my spark a run at the 50.0 percent Fibonacci retracement around the 9,830 figure as the index searches for support.

The dollar rallied against all four counterparts on Monday, led by a 0.22 percent decline in the Euro, while the Australian dollar shed 0.20 percent amid the drop in risk-taking behavior. As the AUDUSD fails to put in a close above the 20-Day SMA (1.0375), the rebound from 1.0163 appears to be tapering off, and the high-yielding currency may weaken further over the coming days as data coming out of China – Australia’s largest trading partner – dampens the outlook for the $1T economy. According to Credit Suisse overnight index swaps, market participants still see the Reserve Bank of Australia lowering the benchmark interest rate by another 100bp over the next 12-months, and the persistent weakness in the interest rate outlook reinforces a bearish outlook for the AUDUSD as it maintains the downward trend carried over from 2011.