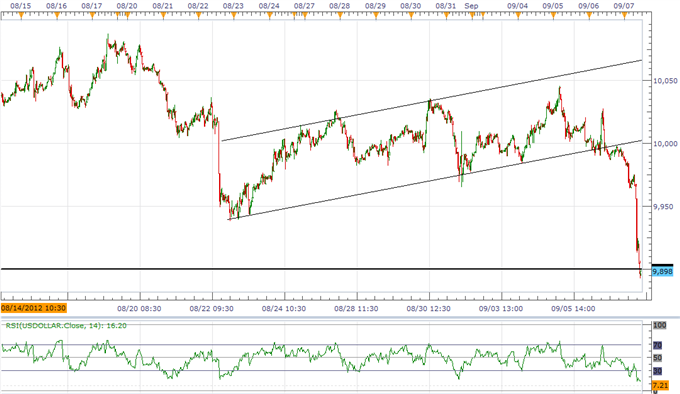 USD Index Breaks 2011 Trend Ahead Of FOMC, All Eyes On German Court

The Dow Jones-FXCM U.S. Dollar Index (Ticker: USDollar) is 0.96 percent lower on the day after moving 228 percent of its average true range, and the reserve currency may continue to give back the advance from earlier this year as the fundamental outlook for the world’s largest economy deteriorates. Indeed, the dismal Non-Farm Payrolls report reinforces a bearish forecast for the dollar as the FOMC interest rate decision comes into focus, and the central bank may sound increasingly dovish amid the persistent weakness in the labor market. In turn, growing speculation for another round of quantitative easing may produce additional declines in the dollar, but we should see a short-term correction once the 30-minute relative strength index bounces back from oversold territory. Nevertheless, as bets for QE3 fuels risk-taking, the dollar may track lower throughout the North American, and we may see the greenback face additional headwinds in the week ahead should the Fed show a greater willingness to expand its balance sheet further. 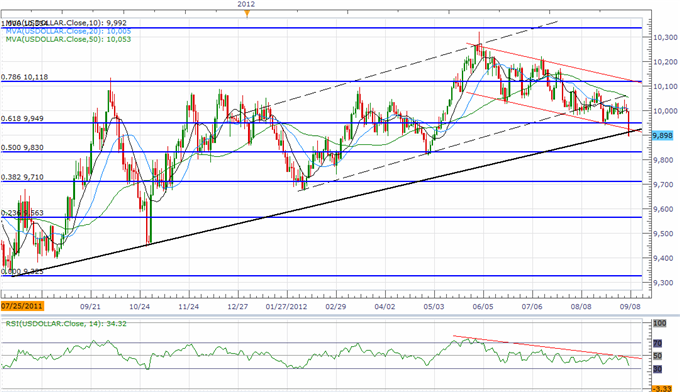 Indeed, the FOMC interest rate decision highlights the biggest event risk for the following week, and we may see the dollar trade heavy going into the policy meeting as a growing number of central bank officials lean towards more easing. There’s speculation that the Fed will implement an ‘open-ended’ QE program next week as Chairman Ben Bernanke looks for a stronger recovery, but the meeting may disappoint should we see the committee continue to rely on its transmission mechanisms. At the same time, we will be closely watching the updated forecast for growth and inflation as the central bank takes note of the slowing recovery, and Chairman Bernanke may sound rather downbeat at the press conference following the meeting amid the ongoing slack in the real economy. As the USDOLLAR slips below the upward trendline dating back to the 2011 low, we should see the descending channel continue to take shape, and we may see the index make a run at the 50.0 percent Fibonacci retracement around the 9,830 figure should the Fed continue to embark on its easing cycle.

The greenback weakened across the board, led by the 1.24 percent rally in the Euro, and the EURUSD may appreciate further over the near-term as it breaks out of the narrow range carried over from the previous month. As the EURUSD fails to maintain the downward trend from 2011, the ascending channel from the end of July looks poised to gather pace over the near-term, but the pair may consolidate over the near-term as the relative strength index approaches overbought territory. Nevertheless, as Germany’s Constitutional Court prepares to rule on the European Stability Mechanism, the development will certainly have a large impact on the EURUSD, and we will need a favorable outcome to see the pair maintain the bullish trend.