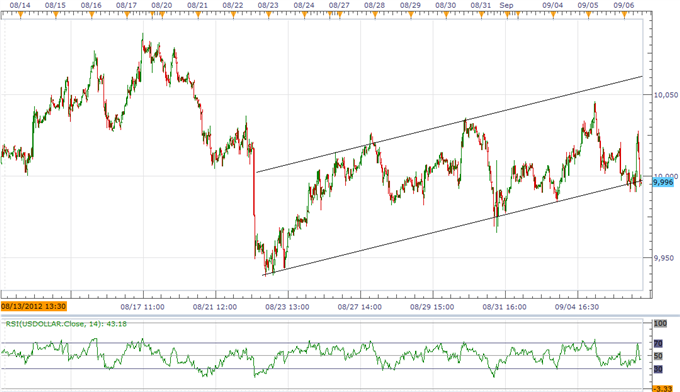 Although the Dow Jones-FXCM U.S. Dollar Index (Ticker: USDollar) is trading 0.15 percent lower from the open, the index appears to be holding the upward trending channel carried over from the previous month, and we may see the greenback consolidate ahead of the employment report as the fresh batch of data coming out of the U.S. raises the outlook for growth. In turn, we may continue to see a series of higher highs paired with higher lows on the shorter-term chart, and we would need to see a positive development tomorrow to see the bullish trend gather pace. Nevertheless, as the European Central Bank interest rate decision disappoints, we may see risk sentiment deteriorate further in the week ahead, and we may see the dollar make another move at the 10,050 figure as the ascending channel continues to take shape. 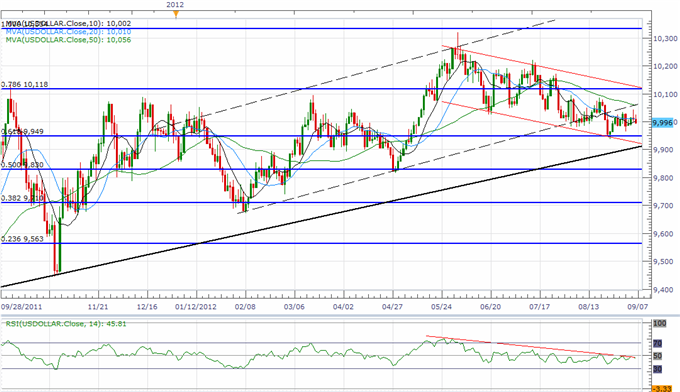 Although U.S. Non-Farm Payrolls are anticipated to increase another 130K in August, we would need a higher-than-expected print to sap bets for another round of quantitative easing, but we will also be keeping a close eye on the jobless rate following the unexpected rise in July. At the same time, wage growth is projected to rise at a faster pace during the same period, and a slew of positive developments should prop up the greenback as it limits the Fed’s scope to implement QE3. Indeed, we’re still watching the descending channel on the daily chart, but the bearish sentiment surrounding the reserve currency may taper off as the relative strength index threatens the downward trend from the end of May. In turn, we may see the USDOLLAR continue to come off of the 61.8 percent Fibonacci retracement around the 9,949 figure, and we may see the greenback track higher ahead of the FOMC interest rate decision on September 13 should the data curb speculation for additional monetary support.

The greenback weakened against three of the four components, led by a 0.92 percent rally in the Australian dollar, but the high-yielding currency may come under pressure over the next 24-hours of trading as the economic docket is expected to reinforce a weakening outlook for the region. Indeed, Australia is expected to see a trade deficit of AUD 300M in July amid the downturn in global trade, and a dismal development is likely to fuel bets for lower borrowing costs as China – Australia’s largest trading partner – faces a growing threat for a ‘hard landing.’ In turn, we will stick by our bearish forecast for the AUDUSD, and we will look to fade rallies in the exchange rate as interest rate expectations deteriorate.