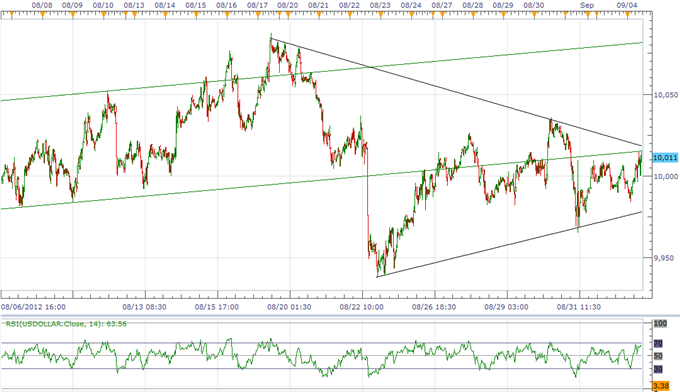 The Dow Jones-FXCM U.S. Dollar Index (Ticker: USDollar) is 0.12 higher on the day after moving 74 percent of its average true range, and the drop in risk-taking behavior may continue to prop up the greenback as it benefits from safe-haven flows. However, as former trendline support appears to be acting as new resistance, with the 30-minute relative strength index falling back from a high of 68, the rebound in the USD may be short-lived as market participants maintain see a growing case for another round of quantitative easing. In turn, speculation for QE3 may drag on the dollar going into the FOMC interest rate decision scheduled for September 13, but we may see Fed Chairman Ben Bernanke stick to the sidelines as Fed officials see a limited risk for a double-dip recession. 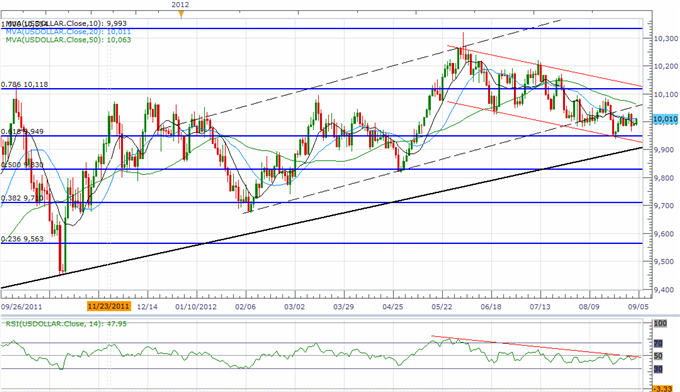 Indeed, the slew of dismal data coming out of the world’s largest economy has heightened speculation for QE3 as the FOMC keeps the door open to expand its balance sheet further, and the highly anticipated Non-Farm Payrolls report on tap for later this week may continue to fuel bets as job growth is expected to low in August. Should the development fall short of market consensus, bets for more easing may trigger a sharp selloff in the index, and we may see the USDOLLAR struggle to hold above the 61.8 percent Fibonacci retracement around 9,949 as the fundamental outlook for the U.S. deteriorates. As the relative strength index maintains the downward trend from the end of May, the descending channel should continue to take shape in September, and we would need a major shift in the policy outlook to see the reserve currency build a short-term base over the coming days.

The greenback strengthen against three of the four counterparts, led by a 0.21 percent decline in the Euro, while the Australian dollar shed 0.19 percent even as the Reserve Bank of Australia kept the benchmark interest rate at 3.50%. Although the RBA maintained its current policy in September, the central bank sounded more cautious this time around as the terms of trade ‘decline significantly,’ and the heightening risk for a ‘hard landing’ in China – Australia’s largest trading partner – may encourage Governor Glenn Stevens to lower borrowing costs throughout the second-half of the year as it aims to promote a stronger recovery. According to Credit Suisse overnight index swaps, markets now see the RBA lowering the cash rate by nearly 100bp over the next 12-months, and the downward trend in the AUDUSD should gather pace as the interest rate outlook comes back under pressure.