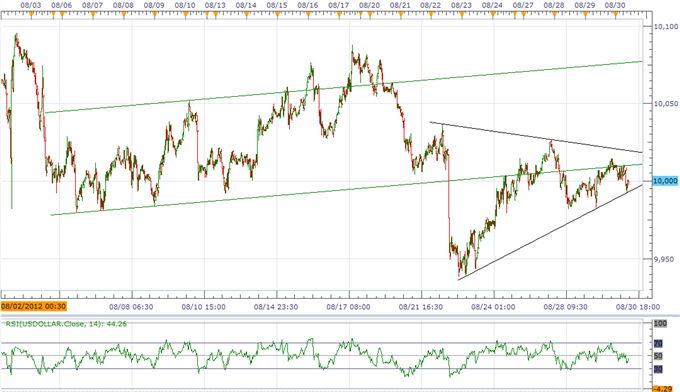 Although the Dow Jones-FXCM U.S. Dollar Index (Ticker: USDollar) remains 0.08 percent lower from the open, the drop in risk-taking behavior is helping to prop up the reserve currency, and the index looks poised for a sharp move as price action approaches the apex of the symmetrical triangle. Indeed, Fed Chairman Ben Bernanke’s speech at the Jackson Hole conference is likely to trigger a sharp move in the dollar as market participants weigh the prospects for another large-scale asset purchase program, but we may see the central bank head refrain from hinting at QE3 as the world’s largest economy gets on a more sustainable path. As the Fed’s Beige Book instills an improved outlook for the U.S., Mr. Bernanke may sound more upbeat this time around, and we may see the FOMC continue to endorse a wait-and-see approach at the September 13 meeting as central bank officials do not see an immediate threat for a double-dip recession. 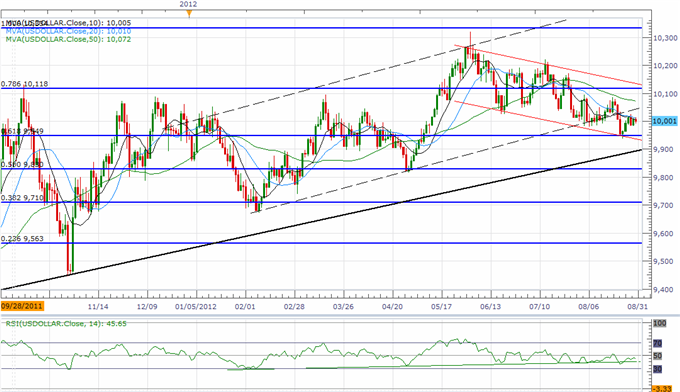 Indeed, Atlanta Fed President Dennis Lockhart, who also serves on the FOMC this year, said it’s ‘a close call’ for QE3 amid the recent slowdown in private sector activity, but it seems as though the committee will continue to stick to the sidelines unless the outlook for growth and inflation deteriorates further. However, as central bank doves see scope for more asset purchases, we may see a growing rift within the committee, and the Fed may keep the door open to expand the balance sheet further in an effort to shield the U.S. economy. As the USDOLLAR fails to put in a close above the 20-Day SMA (10,010), the index may continue to consolidate over the next 24-hours of trading, but we may see the greenback ultimately threaten the downward trend from June should Chairman Bernanke talk down speculation for more easing.

The greenback lost ground against three of the four counterparts, led by a 0.20 percent rally in the Japanese Yen, while the Australian dollar bucked the trend as it shed 0.27 percent from the open. As market sentiment falters, the high-yielding currency may trade heavy going into September, and the aussie may face a sharp selloff in the week ahead should the Reserve Bank of Australia show a greater willingness to ease monetary policy further. Although the RBA is expected to keep the benchmark interest rate at 3.50 percent, Governor Glenn Stevens may sound more dovish this time around as China – Australia’s largest trading partner – faces an increased risk for a ‘hard landing,’ and the central bank may embark on its easing cycle throughout the remainder of the year in an effort to shore up the $1T economy. As the AUDUSD carves out a lower top in August, we should see the downward trend from 2011 continue to take shape, and we will maintain our bearish forecast for the aussie-dollar as the interest rate outlook remains tilted to the downside.