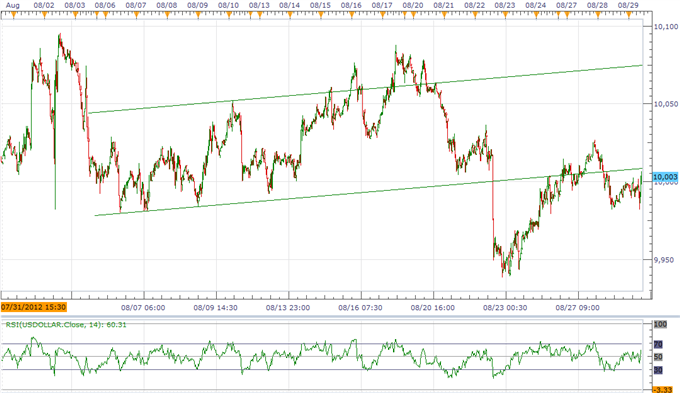 The Dow Jones-FXCM U.S. Dollar Index (Ticker: USDollar) is 0.14 percent higher from the open after moving 57 percent of its average true range, and we may see the dollar hold above the 10,000 figure over the next 24-hours of trading as risk sentiment tapers off ahead of the Jackson Hole Economic Symposium.As the recent batch of data coming out of the world’s largest economy instills an improved outlook for growth, the Fed may sound less dovish going forward, and we may see a sharp reversal in the index should the Fed maintain its current policy in September. However, as the USDOLLAR struggles to trade back within the upward trending channel from earlier this month, former trendline support may act as new resistance, and we may see a very choppy reaction to the central bank conference as current traders go offline ahead of the holiday weekend. 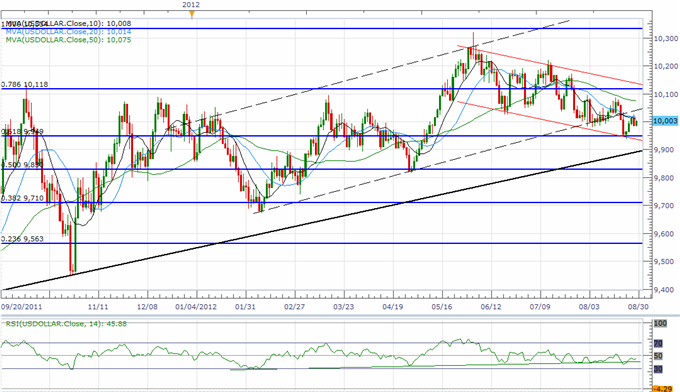 At the same time, we will be closely watching the Fed’s Beige Book on tap for later today, and a more upbeat report may sap expectations for additional monetary support as the central bank expects the recovery to gradually gather pace. In turn, we may see Chairman Ben Bernanke refrain from hinting at QE3, and the central bank head may endorse a wait-and-see approach throughout the remainder of the year as the economy gets on a more sustainable path. As the USDOLLAR continues to come off of trendline support, we may see another run at the 78.6 percent Fibonacci retracement around the 10,118 figure, and the greenback may threaten the downward trend carried over from June if we see Mr. Bernanke talk down expectations of expanding the Fed’s balance sheet further.

The greenback advanced against three of the four components, led by a 0.32 percent decline in the Japanese Yen, while the British Pound continue to outperform against its major counterparts as it advanced another 0.07 on Wednesday. As the Bank of England is widely expected to maintain its current policy at the September 6 meeting, the short-term rally in the GBPUSD looks poised to gather pace over the coming days, and we are looking for a move back above the 1.5900 figure as the upward trending channel from July continues to take shape. As the recent developments coming out of the U.K. top market expectations, the BoE may sound less dovish over the coming months, and we may see the central bank slowly move away from its easing cycle as growth and inflation picks up.