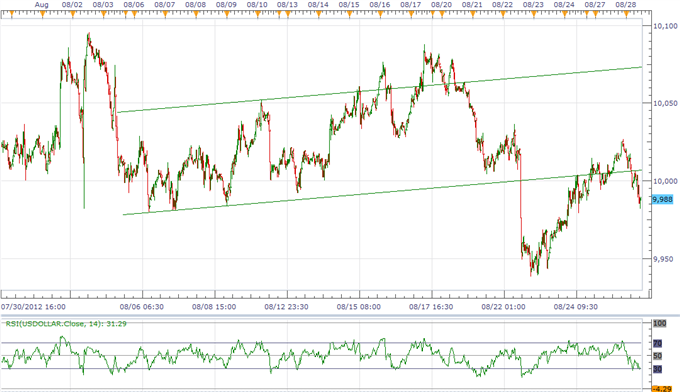 The Dow Jones-FXCM U.S. Dollar Index (Ticker: USDollar) is 0.27 percent lower from the open after moving 97 percent of its average true range, and the greenback may face additional headwinds going into the Jackson Hole Economic Symposium as market participants increase bets for another round of quantitative easing. Indeed, U.S. consumer confidence weakened to the lowest level since November as the Conference Board index slipped to 60.6 in August from 65.4, and the data certainly casts a weakened outlook for private sector consumption, which remains one of the leading drivers of growth. In turn, growing bets for QE3 may weaken the dollar further in the coming days, but the dollar looks poised for a short-term correction over the next 24-hours of trading as the 30-minute relative strength index bounces back from oversold territory. 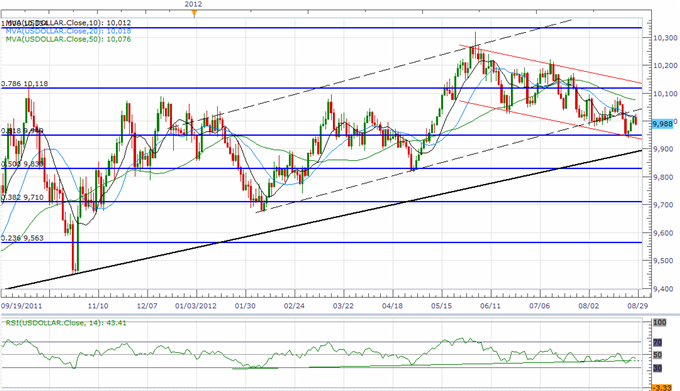 Despite the dovish tone held by central bank officials, Cleveland Fed President Sandra Pianalto, who also serves on the FOMC, sounded rather cautions on expanding the balance sheet further as ‘policies defined to promote further declines in rates could interfere with financial stability.’ Moreover, Ms. Pianalto argued that there are ‘limits to what monetary policy can accomplish,’ and Chairman Ben Bernanke may refrain from hinting at QE3 as the Fed sees the economic recovery gradually gathering pace. Nevertheless, as the USDOLLAR struggles to hold above the 20-Day SMA (10,018), the downward trending channel carried over from June may continue to take shape in in the month ahead, and we would need to see Mr. Bernanke stem speculation for another large-scale asset purchase program to generate a bullish outlook for the USD.

The greenback weakened across the board, led by the 0.54 percent rally in the Euro, while the Japanese Yen advanced 0.33 percent even as the government lowered its outlook for the world’s third-largest economy for the first time in 10 months. Indeed, Japan’s Cabinet Office warned of a slowing recovery amid the ongoing turmoil across the globe, and the Bank of Japan may come under increased pressure to ease policy further as policy makers continue to look for an export-led recovery. Although BoJ Governor Masaaki Shirakawa maintains his pledge to pursue ‘powerful’ monetary easing, government officials may continue to call for a currency intervention amid the persistent strength in the local currency, but the Yen may continue to appreciate against its major counterparts as positive real interest rates in Japan increases the appeal of the JPY.