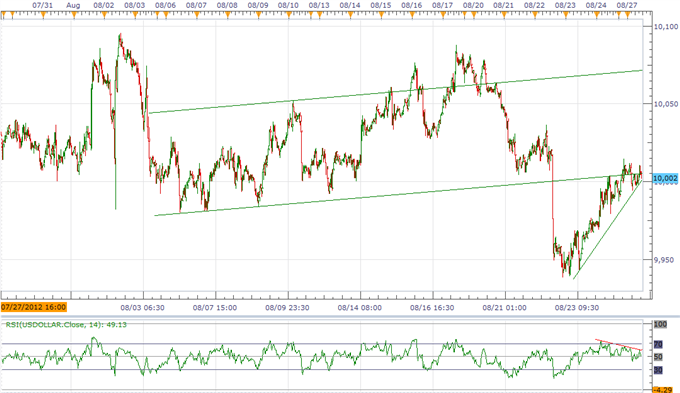 The Dow Jones-FXCM U.S. Dollar Index (Ticker: USDollar) is 0.05 percent higher from the open after moving only 44 percent of its average true range, and the greenback may hold a narrow range going into the Jackson Hole Economic Symposium as market participants weigh the prospects for future policy. Nevertheless, as there appears to be a bearish divergence in the 30-minute relative strength index, the move back above the 10,000 figure is likely to be short-lived, and the dollar may consolidate over the next 24-hours of trading as currency traders maintain calls for another round of quantitative easing. However, as the economic docket is expected to encourage an improved outlook for the U.S., a slew of positive developments may dampen the Fed’s scope to expand its balance sheet further, and we may see Chairman Ben Bernanke sound more upbeat this time around as the recovery gets on a more sustainable path. 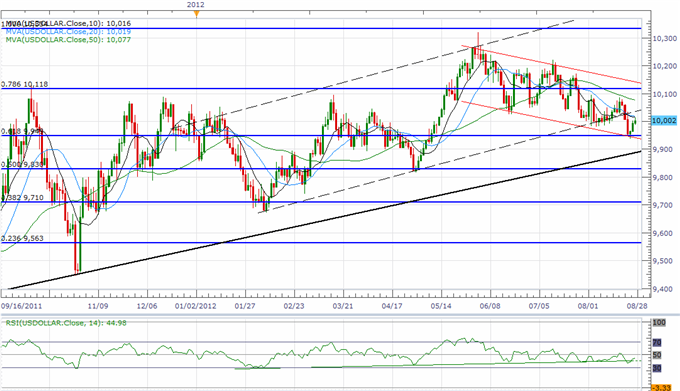 Meanwhile, Chicago Fed President Charles Evans continued to strike a very dovish tone for monetary policy and said that the FOMC should embark on an ‘open ended’ asset purchase program ‘until there was clear evidence of improvement in economic conditions,’ and the committee may face increased pressure to ease policy further amid the ongoing slack in the real economy. As Fed officials show a greater willingness for QE3, it seems as though the downward trend carried over from June will continue to take shape, and the lack of momentum to push back above the 20-Day SMA (10,019) may trigger another test of the 78.6 percent Fibonacci retracement around the 9,949 figure as the central bank strikes a dovish tone for monetary policy. Meanwhile, there’s growing speculation that Fed Chairman Bernanke will refrain from hinting at QE3 following the FOMC Minutes, and we may see the central bank head strike a more neutral tone ahead of the next policy meeting on September 13 as the recovery gradually gathers pace.

Three of the four components weakened against the greenback, led by a 0.12 percent decline in the Australian dollar, while the sterling continued to give back the sharp advance from the previous week as it lost another 0.05 percent. Although the pullback from 1.5911 appears to be picking up, the recent weakness in the GBPUSD is likely to be short-lived as the upward trending channel carried over from June continues to take shape. Indeed, the British Pound may track higher going into September as the Bank of England is widely expected to maintain their current policy, and the central bank may continue to endorse a wait-and-see approach throughout the remainder of the year as the new lending program is expected to boost private sector activity. In turn, we will continue to look for a series of higher highs paired with higher lows in the GBPUSD, and we may see the pair test former resistance around 1.5740-50 figure for interim support as breaks out of the range-bound price action from earlier this year.