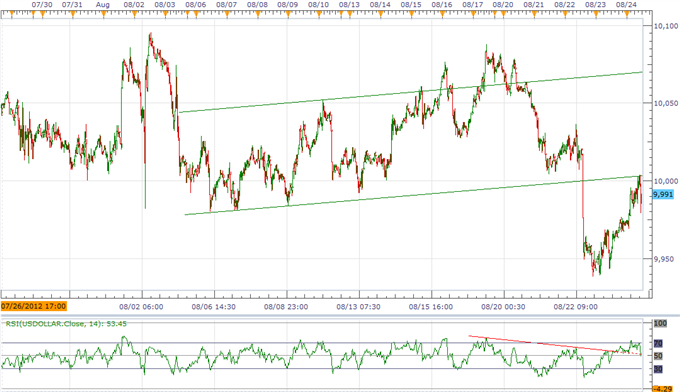 USD Rebound To Pick Up Ahead Of Jackson Hole, AUD Threatens Support

The Dow Jones-FXCM U.S. Dollar Index (Ticker: USDollar) remains 0.15 percent higher from the open after moving 74 percent of its average true range, and the drop in risk-taking behavior may prop up the reserve currency throughout the North American trade as it benefits from safe-haven flows. However, former trendline support may act as new resistance as the index struggles to trade back within the upward trending channel from earlier this year, and we may see the dollar consolidate going into the end of the week as the 30-minute relative strength index comes off of overbought territory. In turn, we may see the index struggle to end the week above the 10,000 figure, and the dollar may face additional headwinds in the days ahead as market participants turn their attention to the central bank conference in Jackson Hole, Wyoming. 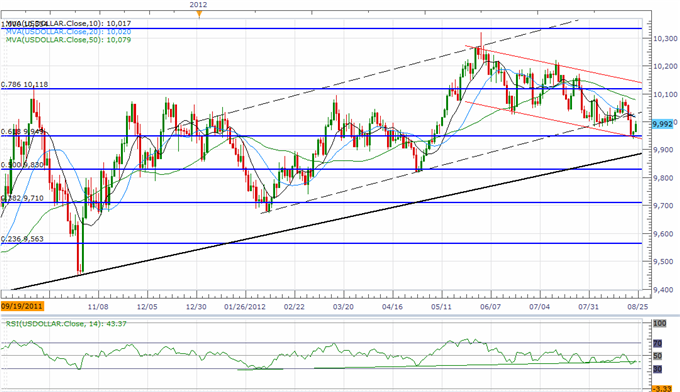 Indeed, Fed Chairman Ben Bernanke fueled bets for another round of quantitative easing as the central bank head sees ‘scope for further action,’ and we may see Fed officials show a greater willingness to expand the balance sheet further in an effort to encourage a stronger recovery. In turn, currency traders may turn increasingly bearish against the USD going into the central bank conference, but the short-term rebound in the index may turn into a larger correction as it appears to be finding trendline support, which coincides with the 61.8 percent Fibonacci retracement around the 9,949 figure. In turn, the rebound may spark a run at the 78.6 percent Fib around 10,118, but the index looks poised to give back the advance from earlier this year as the downward trending channel continues to take shape.

The greenback advanced against all four components, led by a 0.28 percent decline in the Australian dollar, and the AUDUSD may weaken further in the days ahead as it continues to carve a lower top around the 1.0600 figure. As the aussie-dollar maintains the downward trend carried over from 2011, we will maintain our bearish forecast for the high-yielding currency, and we may see a break below the 23.6 percent Fib from the 2010 low to the 2011 high around 1.0370-80 as the economic docket is expected to show a slowing recovery in the region. Although Reserve Bank of Australia Governor Glenn Stevens remains upbeat towards the $1T economy, the weakening outlook for the region is likely to put increased pressure on the central bank to lower the benchmark interest rate further, and the RBA may carry out its easing cycle throughout the remainder of the year as China – Australia’s largest trading partner – faces a greater threat for a ‘hard landing.’