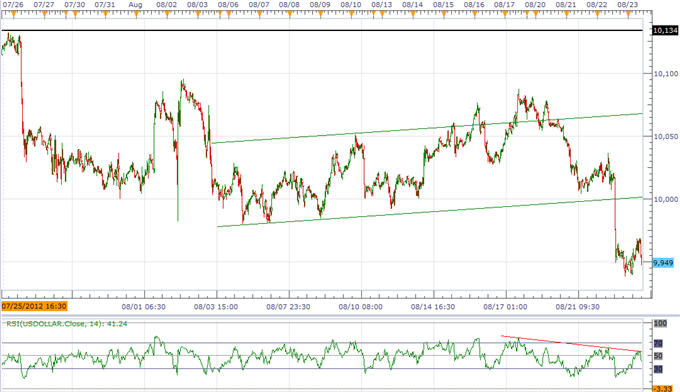 The Dow Jones-FXCM U.S. Dollar Index (Ticker: USDollar) is 0.10 percent lower from the open after moving 58 percent of its average true range, and we may see the greenback consolidate further over the next 24-hours of trading as the dovish tone struck by the Federal Reserve comes under increased scrutiny. As the USDOLLAR fails to maintain the upward trend from earlier this month, we’ve scaled back our bullish forecast for the greenback, and we will be keeping a close eye on the 30-minute relative strength index as it appears to be carving out a downward trend. Indeed, the bearish sentiment surrounding the dollar may gather pace ahead of the Jackson Hole Economic Symposium on tap for the following week as market participants increase bets for another large-scale asset purchase program, but the conference may fail to generate further dollar weakness should Fed Chairman Ben Bernanke refrain from hinting at QE3. 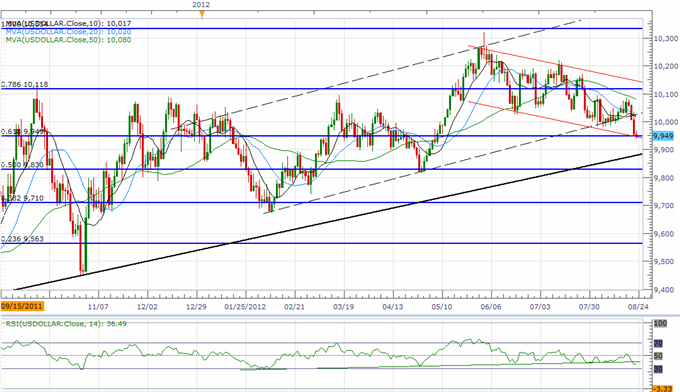 Although Chicago Fed President Charles Evens endorsed additional monetary easing while speaking in China, St. Louis Fed President James Bullard argued that the FOMC Minutes ‘are a bit stale’ as the recent batch of data coming out of the world’s largest economy encourage an improved outlook for growth. At the same time, Mr. Bullard warned that QE3 may complicate the Fed’s exit strategy as the central bank continues to rely on its transmission mechanisms, and encouraged the central bank to preserve its wait-and-see approach as the recovery gets on a more sustainable path. However, the technical outlook paints a very bearish picture for the USDOLLAR as it fails to maintain the upward trend from earlier this year, and it seems as though the descending channel from June will continue to take shape as it struggles to hold above the 61.8 percent Fibonacci retracement around the 9,949 figure. Nevertheless, should the index find trendline support, we may see the rebound from 9,938 pickup going into the end of the week, but the reserve currency may face additional headwinds in the week ahead should the Fed show a greater willingness to expand its balance sheet further.

Three of the four components rallied against the greenback, led by a 0.36 percent advance in the Euro, while the Australian dollar slipped 0.25 percent amid the weakening outlook for China – Australia’s largest trading partner. As the world’s second-largest economy faces a greater risk for a ‘hand landing,’ we may see the Reserve Bank of Australia maintain a dovish tone for monetary policy, and Governor Glenn Stevens may talk up speculation for a rate cut as the central bank head is scheduled to testify on monetary policy later today. Should Mr. Stevens see scope for lower borrowing costs, we may see the AUDUSD continue to retrace the rally from June, and the high-yielding currency may track lower going into September as it maintains the downward trend carried over from 2011.