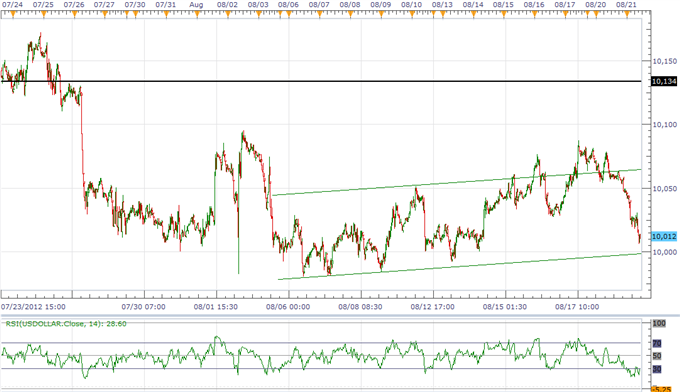 The Dow Jones-FXCM U.S. Dollar Index (Ticker: USDollar) is 0.53 percent lower from the open after moving 110 percent of its average true range, and we will be closely watching the 10,000 figure as the pair comes up against trendline support. As the 30-minute relative strength index bounces back from a low of 17, we should see a rebound once the oscillator pushes back above oversold territory, and we will maintain our bullish call for the dollar as long as the index holds above the month low (9,980). As the greenback continues to produce a series of higher lows paired with higher highs, we should see the upward trending channel from earlier continue to take shape, and the FOMC Minutes on tap for tomorrow may increase the appeal of the reserve currency should the central bank talk down speculation for another round of quantitative easing. 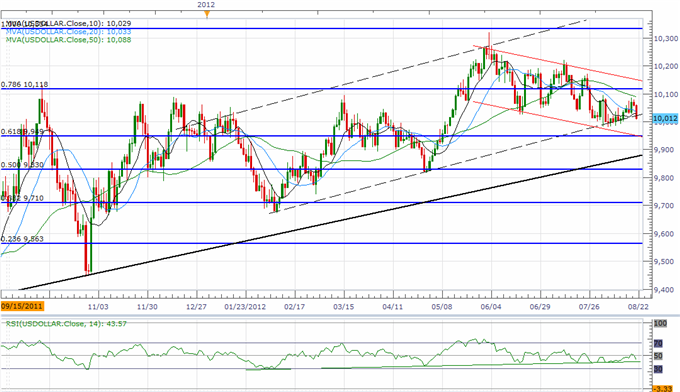 Despite the persistent call for QE3, Atlanta Fed President Dennis Lockhart, who also serves on the FOMC this year, warned that ‘there is a risk to monetary policy being employed too aggressively,’ and took note of the ‘firm’ data coming out of the world’s largest economy as the recovery gets on a more sustainable path. In turn, the policy statement may highlight an improved outlook for the region, and we may see the committee soften its dovish tone for monetary policy as Fed officials anticipate to see economic activity gradually gather pace throughout the second-half of the year. As the USDOLLAR continues to build a short-term base in August, we would like to see the index close above the trendline from earlier this year to favor a bullish bias, and the economic docket on tap for tomorrow may prop up the greenback as U.S. Existing Home Sales are expected to bounce back in July.

Three of the four components advanced against the dollar, led by the 1.00 percent rally in the Euro, while the Australian dollar advanced 0.61 percent as the Reserve Bank of Australia struck an improved outlook for the $1T economy. Indeed, the RBA curbed bets for another series of rate cuts as the central bank sees the region withstanding the slowdown in global growth, and it sees as though Governor Glenn Stevens will keep the benchmark interest rate at 3.50 percent over the medium-term as growth in China – Australia’s largest trading partner – ‘appeared to be stabilizing.’ Nevertheless, market participants are still looking for 50bp worth of rate cuts over the next 12-months according to Credit Suisse overnight index swaps, and the RBA may have little choice but to carry out its easing cycle throughout the remainder of the year as China continues to face a risk for a ‘hard landing.’