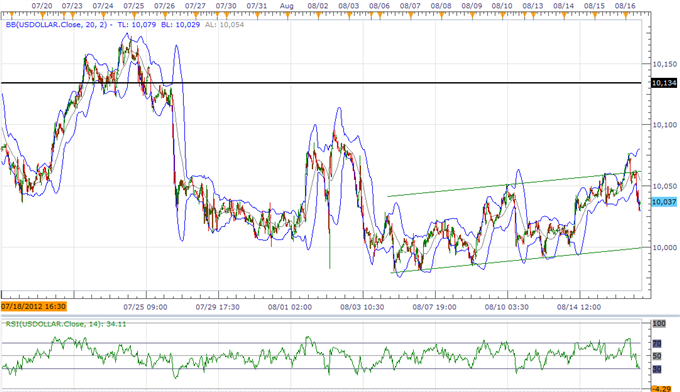 The Dow Jones-FXCM U.S. Dollar Index (Ticker: USDollar) is 0.10 percent lower on the day following the mixed batch of data coming out of the world’s largest economy, but the recent pullback in the reserve currency is likely to be short-lived as long as the 30-minute relative strength index holds above oversold territory. In turn, we should see the upward trending channel from earlier this month continue to take shape, and we will stick to our bullish forecast for the USD as the Federal Reserve continues to talk down speculation for another large-scale asset purchase program. Nevertheless, the rebound in risk sentiment may continue to dampen the appeal of the reserve currencyas the economic docket for the U.S. remains fairly light for the remainder of the week, but a dismal U. of Michigan Confidence print may sap risk-taking behavior as it dampens the outlook for growth. 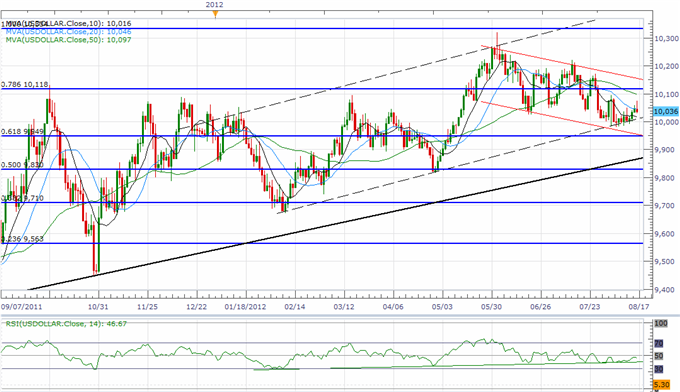 Indeed, Minneapolis Fed President Narayana Kocherlakota floated the idea of lowering the interest rate on commercial bank reserves ‘to incentivize banks to lend,’ while Richmond Fed President Jeffrey Lacker, who serves on the FOMC this year, argued that ‘there are a lot of people overestimating the extent to which monetary policy is capable of having any sustained effect on growth or labor markets’ as he continues to dissent against committee’s pledge to retain the zero-interest rate policy until late 2014. The fresh batch of central bank rhetoric certainly dampens the likelihood of seeing another round of quantitative easing as Fed officials see the recovery gradually gathering pace throughout the second-half of the year. As the USDOLLAR continues to come off of trendline support, we are still looking for a close above the 20-Day SMA (10,046) to see the rebound from 9,980 to gather pace, and we will look for further advances in the index as it maintains the upward trend from earlier this year.

Once again, two of the four components advanced against the greenback, led by a 0.55 percent rally in the Euro, while the British Pound gained another 0.35 percent amid the positive developments coming out of the U.K. The series of higher highs paired with higher lows in the exchange rate certainly instills a bullish outlook for the GBPUSD, but the lack of momentum to clear the 100-Day SMA at 1.5751 may continue to produce range-bound prices as the Bank of England reverts back to a wait-and-see approach. Nevertheless, a close above the 200-Day SMA (1.5715) may set the stage for a bullish breakout, and we will keep a close eye on the RSI as it approaches interim resistance around the 58 figure.