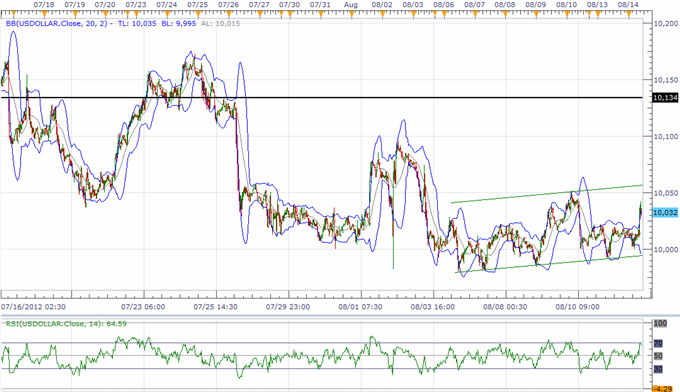 The Dow Jones-FXCM U.S. Dollar Index (Ticker: USDollar) remains 0.17 percent higher from the open after moving 76 percent of its average true range, and the reverse currency may track higher over the remainder of the week as an upward trending channel appears to be taking shape. As the dollar builds a short-term base in August, we may see a bullish breakout in the greenback, but the index looks poised for a short-term pullback before a larger move to the upside as the 30-minute relative strength index approaches overbought territory. Nevertheless, we would like to see the dollar close above the 10,050 figure to reinforce our bullish call for the reserve currency, and we should see the greenback strengthen further over the remainder of the year as the fundamental developments coming out of the U.S. continues to dampen the Fed’s scope to expand the balance sheet further. 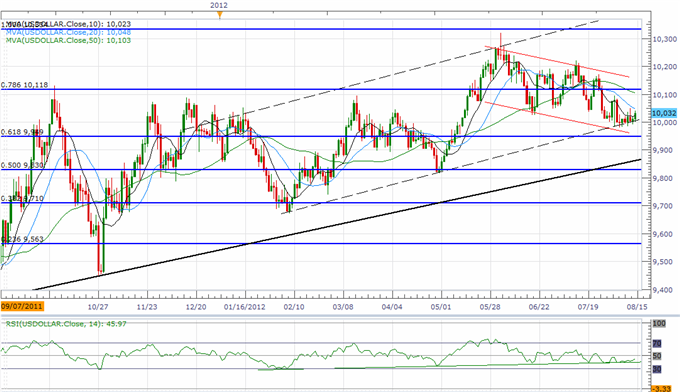 Indeed, the sharp rebound in U.S. retail sales paired with the uptick in core producer prices has propped up the dollar, and the pickup in growth and inflation may encourage Fed Chairman Ben Bernanke to further soften his dovish tone for monetary policy as the recovery gradually gathers pace. According to Credit Suisse overnight index swaps, market participants are starting to price-in a rate hike for the next 12-months, and the rise in the interest rate outlook should carry the dollar higher as the FOMC slowly moves away from its easing cycle. In turn, we’re feeling more confident that the USDOLLAR is in fact carving out a higher low in August, and we are still looking for a fresh yearly highs in the index as the upward trending channel from earlier this year remain intact. As we have U.S. CPI on tap for tomorrow, a stronger-than-expected inflation print may fuel another bullish reaction in the USD, and we should see the Fed continue to talk down speculation for QE3 as the world’s largest economy gets on a more sustainable path.

Two of the four components weakened against the greenback, led by a 0.65 percent decline in the Japanese Yen, and the low-yielding currency may continue to lose ground against its U.S. counterpart as the Bank of Japan continues to talk up speculation for additional monetary support. Indeed, the policy meeting minutes showed a few members arguing that the central bank shouldn’t rule out any options in advance as they aim to achieve the 1 percent target for inflation, and it seems as though the board is looking beyond its current policy tools amid the ongoing weakness in the real economy. As the USDJPY continues to build a short-term base around the 78.00 figure, the pair certainly looks poised for a sharp move to the upside, but we may see the dollar-yen continue to consolidate over the near-term as the BoJ maintains a wait-and-see approach.