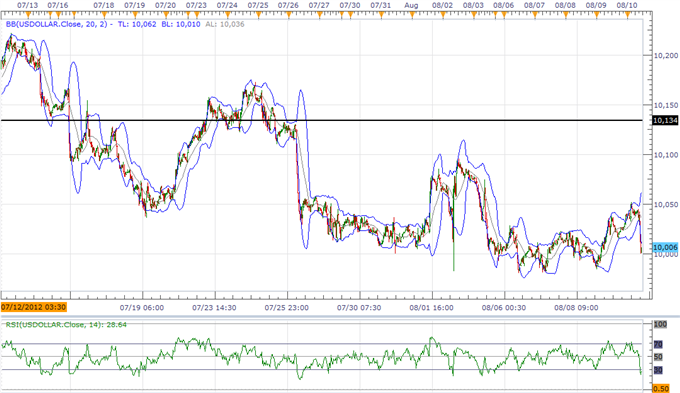 USD Index Continues to Build Base, JPY At Risk Amid Slower Growth

The Dow Jones-FXCM U.S. Dollar Index (Ticker: USDollar) is 0.13 percent lower on the day after moving 91 percent of its average true range, but the sharp decline may be short-lived as the greenback holds above the 10,000 figure. Indeed, we’ll be keeping a close eye on the 30-minute relative strength index as it dips into oversold territory, and we should see a short-term bounce in the index once the oscillator gets back above 30, and we will need to see the index hold above the monthly low (9,980) to maintain our bullish forecast for the reserve currency. As the dollar appears to be carving out a short-term base in August, the index looks poised to retrace the sharp decline from the previous month, and we may see the dollar track higher next week as the economic docket is expected to encourage an improved outlook for the U.S. 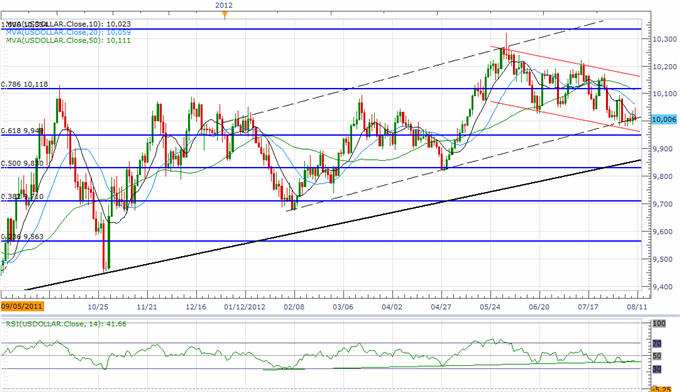 Although the recent series of lower highs paired with lower lows casts a bearish outlook for the greenback, it seems as though the dollar remains stuck in a consolidation phase as it maintains the ascending channel from earlier this year. As we’re expecting to see a rebound in U.S. retail sales paired with sticky inflation, a slew of positive developments coming out of the world’s largest economy should prop up the greenback, and we may see a dollar track higher over the coming days as the data dampens expectations for additional monetary support. Although Fed Chairman Ben Bernanke has taken note of the ‘fragile’ recovery, it seems as though the FOMC is moving away from quantitative easing as it continues to embark on ‘Operation Twist,’ and the committee may continue to endorse a wait-and-see approach throughout the remainder of the year as the recovery gradually gathers pace.

Two of the four components strengthened against the greenback, led by a 0.44 percent rally in the Japanese Yen, but the low-yielding currency may come under pressure next week as the world’s third-largest economy is expected to expand at a slower pace in the second quarter. The 2Q GDP report is expected to show Japan growing 0.6% during the three-months through June after expanding 1.2% in the first-quarter, and the slowing recovery may spark speculation for additional monetary support as the Bank of Japan maintains its pledge to pursue powerful monetary easing. Indeed, the BoJ may face additional pressures to intervene in the currency market amid the resilience in the Yen, but it appears as though the central bank will stick to the sidelines as policy makers hold an improved outlook for the region.