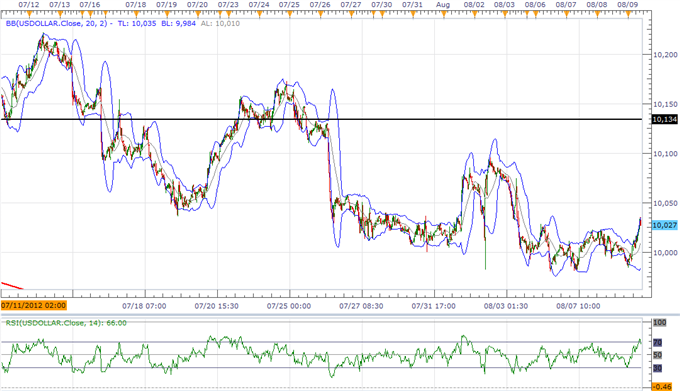 The Dow Jones-FXCM U.S. Dollar Index (Ticker: USDollar) is 0.25 percent higher from the open after moving 91 percent of its average true range, and the short-term correction in the greenback appears to be coming to an end as it carves out a short-term bottom around the 9,980 figure. In turn, we will maintain our bullish forecast for the USD, but we may see a small pullback over the next 24-hours of trading as the 30-minute relative strength index pushes into overbought territory. Nevertheless, as the economic docket for the U.S. remains fairly light for the remainder of the week, we should see market sentiment continue to influence price action for the greenback, and headlines coming out of the euro-area may prop up risk-taking behavior as European policy makers increase their effort to restore investor confidence. 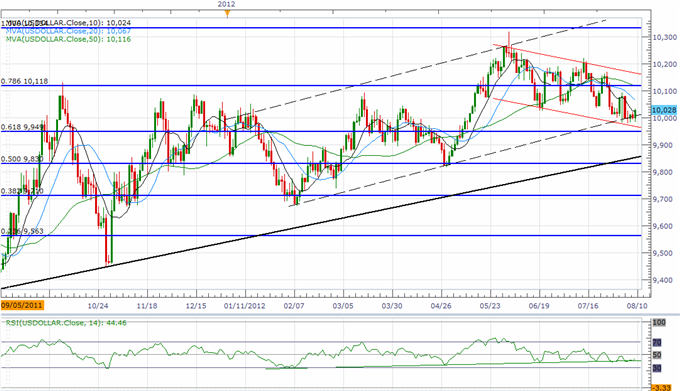 As the USDOLLAR continues to come off of trend line support, the upward trend from earlier this year should continue to take shape, and we would like to see the relative strength follow suit for the rebound to gather pace. As the greenback builds a base in August, the index appears to be setting up for a move back to the upside, but the dollar needs to get back towards the 10,200 figure to maintain a bullish outlook for the remainder of the year. Meanwhile, Fitch Ratings argued that the European Central Bank may need to implement another Long-Term Refinancing Operation (LTRO) in light of its quarter survey as a record 53 percent of the respondents held a weakened outlook for the banking sector, and we may see the Governing Council implement a range of tools over the coming months as the fundamental outlook for the region turns increasingly bleak. In turn, the flight to safety may continue to gather pace over the near-term, and we should see the drop in risk-taking behavior continue to prop up the reserve currency as it benefits from safe-haven flows.

The greenback strengthened against three of its four counterparts, led by a 0.47 percent decline in the Euro, while the Australian dollar advanced 0.07 percent amid the larger-than-expected rise in employment. However, as the relative strength index on the AUDUSD continues to find resistance around the 67 figure, the rally to 1.0612 may be short-lived, and the pair appears to be carving out a near-term top in August as it maintains the downward trend carried over from 2011. However, as the Reserve Bank of Australia is scheduled to deliver its Monetary Policy Statement later tonight, we may see the central bank continue to endorse a wait-and-see approach amid the positive developments coming out of the $1T economy, and Governor Alan Bollard may talk down speculation for a rate cut as the recovery gradually gathers pace. Nevertheless, market participants are still looking for at least 50bp worth of rate cuts over the next 12-months according to Credit Suisse overnight index swaps, and a dovish statement could spark a reversal in the exchange rate as interest rate expectations deteriorate.