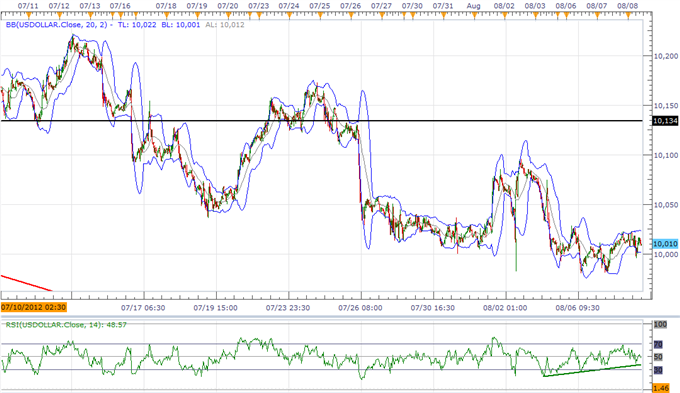 Although the Dow Jones-FXCM U.S. Dollar Index (Ticker: USDollar) remains little changed from the open, the short-term rebound may gather pace over the remainder of the week as the upward trend in the 30-minute relative strength index continues to take shape. As headlines coming out of Europe saps risk-taking behavior, we may see market sentiment continue to taper off in the days ahead, and the dollar looks poised for a larger correction as the Fed continues to talk down speculation for additional monetary support. Nevertheless, we should see risk-trends continue to drive price action for the reserve currency as the economic docket for the U.S. remains fairly light for the rest of the week, but China’s Consumer Price report on tap for later tonight may prop up market sentiment should the data fuel expectations for more easing from the People’s Bank of China. 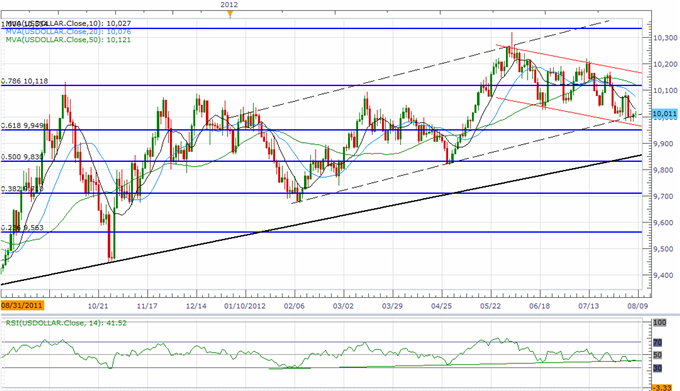 In contrast to Boston Fed President Eric Rosengren, Dallas Fed President Richard Fisher struck a hawkish tone for monetary policy, arguing that the FOMC ‘has done enough’ as market participants continue to look for another large-scale asset purchase program. Mr. Fisher warned that additional monetary stimulus risks ‘overburdening the central banks,’ and encouraged the government to create incentives to foster private sector activity. As the FOMC continues to embark on ‘Operation Twist,’ we continue to see limited scope for QE3, and the shift in the policy outlook should continue to prop up the dollar as the central bank appears to be moving away from quantitative easing. As the USDOLLLAR continues to straddle the ascending channel from earlier this year, we would need to see the relative strength index preserve the upward trend for confirmation, and the rebound from 9,980 may continue to gather pace as the greenback appears to be carving out a higher low in August.

Three of the four components rallied against the greenback, led by a 0.23 percent against the Japanese Yen, but the low-yielding currency may struggle to hold its ground over the next 24-hours of trading as the Bank of Japan is widely expected to strike a dovish tone for monetary policy. Beyond the rate decision, newly appointed Takahide Kiuchi and Takehiro Sato are anticipated to push for additional stimulus amid the ongoing weakness in the real economy, and we should see the central bank continue to carry out its easing cycle throughout the second-half of the year as it aims to meet the 1percent target for inflation. As the USDJPY remains supported by the 78.00 figure, it looks as though the pair is building a short-term base in August, and we will keep a close eye on the relative strength index as it continues to move away from oversold territory.