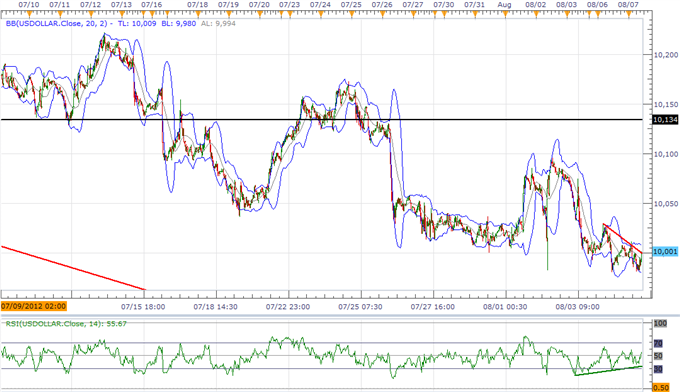 The Dow Jones-FXCM U.S. Dollar Index (Ticker: USDollar) is little changed after moving 51 percent of its average true range, but there appears to be a bullish divergence in the 30-minute relative strength index as it continues to come off of oversold territory. If the pattern take shape over the next 24-hours of trading, the rebound from 9,981 should gather pace going into the middle of the week, which could spark another run at the 10,100 figure. However, as the economic docket for the U.S. remains fairly light over the remainder of the week, we should see risk trends continue to dictate price action for the greenback, and the rise in market sentiment may pick up in the days ahead as European policy makers increase their pledge to tackle the debt crisis. 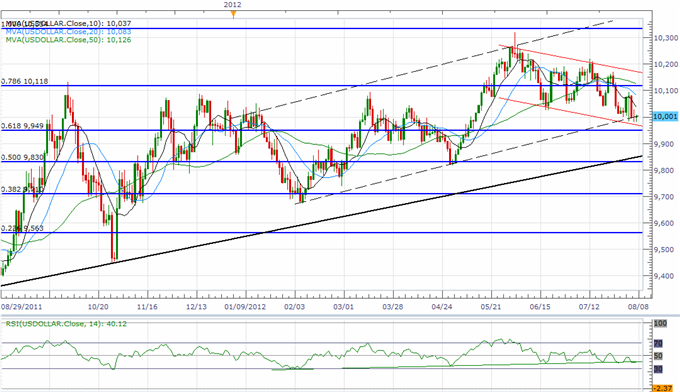 Indeed, Boston Fed President Eric Rosengren argued that the FOMC should embark on an’ open-ended’ quantitative easing program of ‘substantial magnitude’ amid the heightening turmoil in the world economy, and went onto say that the new initiative should ‘focus on economic outcomes’ in an effort to encourage a stronger recovery. However, as the committee continues to carry out ‘Operation Twist,’ it seems as though the Fed will sit on the sidelines over the remained of the year, and we may see Chairman Ben Bernanke continue to soften his dovish tone for monetary policy as the economy gets on a more sustainable path. Indeed, the move below trendline support might turn out to be a false break as the relative strength index continues to straddle the upward trend from earlier this year, and a close above the 10,000 figure could pave the way for a short-term correction in the index.

The greenback weakened against three of the four components, led by a 0.31 percent rally in the British Pound, but the sterling may struggle to hold its ground over the next 24-hours of trading as the Bank of England quarterly inflation report is expected to highlight a weakening outlook for the U.K. Indeed, there’s speculation that the BoE will curb its forecast for growth and inflation amid the deepening recession, and Governor Mervyn King may lean towards additional quantitative easing as the central bank sees a renewed risk of undershooting the 2% target for inflation. In turn, a very dovish statement may spark a sharp selloff in the exchange rate, and we may see the GBPUSD threaten interim support around the 1.5500 figure as market participants increase bets for more monetary support.