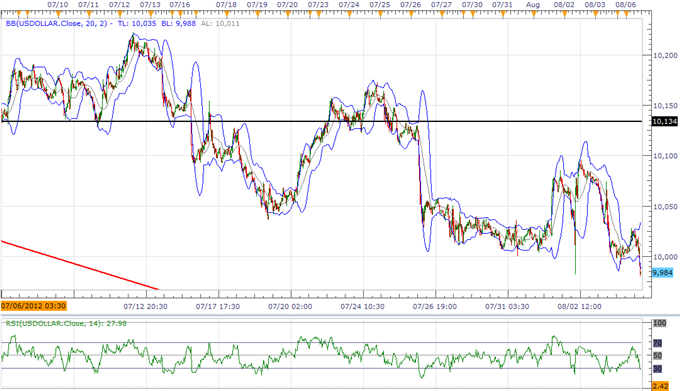 The Dow Jones-FXCM U.S. Dollar Index (Ticker: USDollar) is 0.17 percent lower from the open after moving 77 percent of its average true range, and the index may continue to give back the rally from earlier this year as it appears to be carving out a new trend. As the greenback struggles to hold above the 10,000 figure, the series of lower highs paired with lower lows casts a bearish outlook for the greenback, but we will be keeping a close eye on the 30-minute relative strength index as it approaches oversold territory. Nevertheless, we are likely to see risk-trends dictate price action in the currency market as the economic docket remains fairly light for the next 24-hours of trading, and the bearish sentiment underlining the greenback may gather pace over the near-term as market participants maintain bets for another large-scale asset purchase program. 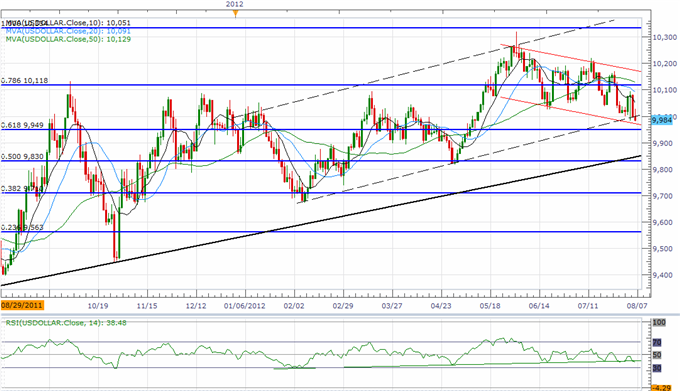 Fed Chairman Ben Bernanke sounded more cautious this week as he points out that ‘many individuals and households continue to struggle with difficult economic and financial conditions,’ and it seems as though the central bank head will keep the door open to expand the balance sheet further in an effort to foster a stronger recovery. However, as the Fed sees no immediate threat for a double-dip recession, we should see the FOMC carry out ‘Operation Twist’ over the remainder of the year, and the committee may gradually move away from quantitative easing as the economy gets on a more sustainable path. However, the bullish pattern in the USDOLLAR appears to be coming to an end as the relative strength index struggles to maintain the upward trend from earlier this year, and the greenback may work its way back towards the 9,900 figure over the near-term to test the bullish trendline dating back to 2011. In turn, it seems as though we will see lower prices in the coming days, but we would like to see the RSI make a run at oversold territory to flip our stance on the reserve currency.

Three of the four components strengthened against the greenback, led by a 0.37 percent advance in the Japanese Yen, but we may see the Bank of Japan increase its effort to weaken the local currency as the central bank sticks to its easing cycle. With new board member Takahide Kiuchi pushing the board to look at new forms of monetary support, we may see the BoJ implement additional measures to dampen the appeal of the Yen, but we may see the low-yielding currency continue to appreciate against its counterpart should the central bank continue to stick to the sidelines.