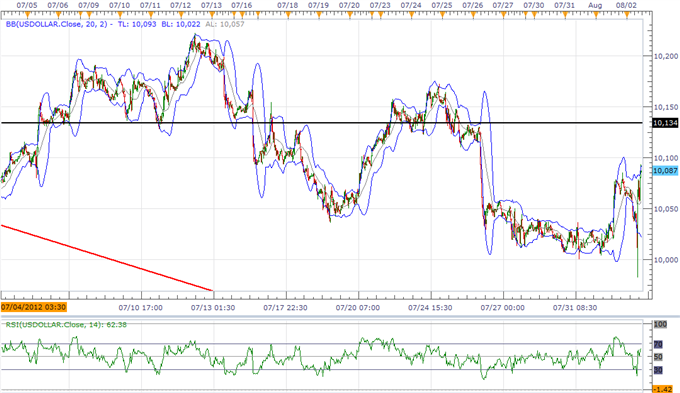 The Dow Jones-FXCM U.S. Dollar Index (Ticker: USDollar) is 0.12 percent higher from the open after moving 188 percent of its average true range, and the index may track higher going into the end of the week as the 30-minute relative strength index comes off of oversold territory. As the European Central Bank interest rate decision fails to prop up market sentiment, the drop in risk-taking behavior should prop up the reserve currency over the next 24-hours of trading, and we may see the dollar end the week on a brighter note as we’re expecting to see faster job growth in July. Indeed, NFPs are expected to increase another 100K after expanding 80K in June, and a positive development may spark a bullish reaction in the greenback as it dampens the scope for another round of quantitative easing. 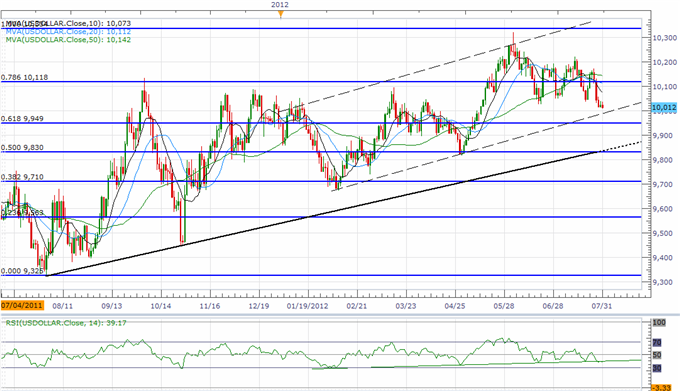 As the USDOLLAR bounces off of trendline support, the short-term correction in the index appears to be coming to an end, and we may see the upward trend from earlier this year continue to take shape as the Fed appears to be moving away from its easing cycle. Beyond the headline print for NFPs, we will also be keeping a close eye on the average weekly earnings index amid the stickiness in underlying price growth, and a pickup in wage growth may prompt the FOMC to soften its dovish tone for monetary policy as it raises the threat for inflation. Indeed, it seems as though the Fed will not implement QE3 unless the economy faces a real danger of slipping back into recession, and we should see the central bank stick to the sidelines over the remainder of the year as it continues to carry out ‘Operation Twist.’ In turn, we will stick by our bullish call for the USD, and the index looks poised to push higher in August as it carves out a higher low this week.

Three of the four components weakened against the greenback, led by a 0.61 percent decline in the Euro, while the Japanese Yen bucked the trend and gained 0.31 percent on the day. As positive real interest rates in Japan continues to increase the appeal of the Yen, the low-yielding currency may continue to appreciate against its U.S. counterpart, but the USDJPY appears to be carving out a bottom around 77.90-78.00 as it breaks out of the downward trending channel carried over from the previous month. As a result, we will keep a close eye on the relative strength index as it continues to come off of oversold territory, and the shift in the policy outlook for the Fed and Bank of Japan may push the exchange rate higher as Governor Masaaki Shirakawa maintains his pledge to pursue powerful monetary easing.