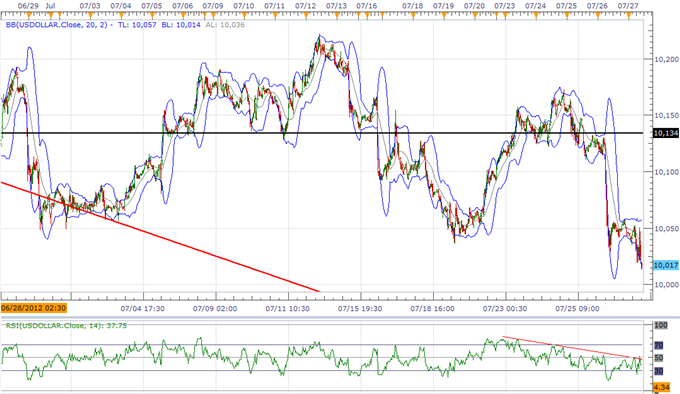 The Dow Jones-FXCM U.S. Dollar Index (Ticker: USDollar) is 0.32 percent lower from the open after moving 80 percent of its average true range, and we may see the greenback trade heavy throughout the North American trade as market participants increase their appetite for risk. However, as the 30-minute relative strength index breaks out of the downward trend from earlier this month, we dollar looks poised for a short-term correction, and we may see the reserve currency appreciate going into the FOMC interest rate decision as the central bank moves away from quantitative easing. As the advance 2Q GDP report raises the outlook for growth and inflation, we should see the FOMC continue to soften its dovish tone for monetary policy, and the central bank may strike an improved outlook for the world’s largest economy as the recovery gathers pace. 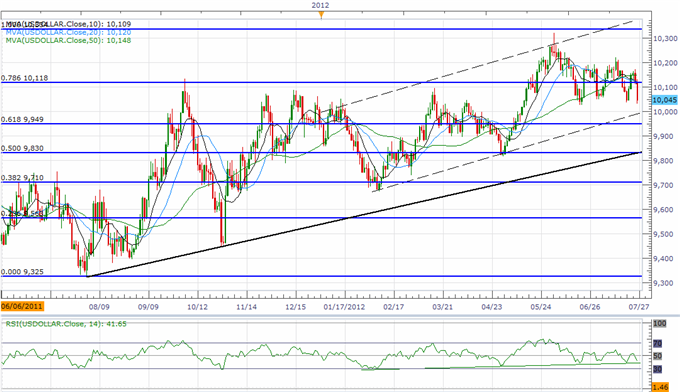 As the USDOLLAR threatens the ascending channel from earlier this year, we’re keeping a close eye on the upward trend in the relative strength index, and we would need to see the index hold above the 10,000 figure to maintain our bullish outlook for the greenback. Indeed, the FOMC is widely expected to maintain its current policy in August as the committee extends ‘Operation Twist,’ and we may see Fed Chairman Ben Bernanke talk down speculation for another large-scale asset purchase program as the committee anticipates to see a more robust recovery over the coming months. At the same time, the U.S. Non-Farm Payrolls report is expected to show a pickup in job growth as employment is anticipated to increase another 100K in July following the 80K expansion the month prior, and a slew of positive developments may spark a sharp reversal in the index as market participants scale back bets for QE3.

Three of the four components strengthened against the greenback, led by a 0.72 percent rally in the Euro, while the Japanese Yen halted its seven-day rally against its U.S. counterpart amid the rise in risk sentiment. Indeed, the USDJPY looks poised for a sharp correction as the relative strength index turns higher ahead of oversold territory, but the rebound in the dollar-yen may be short-lived as the pair maintains the downward trend from earlier this month. As positive real interest rates in Japan continues to heighten the appeal of the Yen, we may see the USDJPY continue to give back the rebound from June (77.65), but the FOMC interest rate decision could be a game-changer for the pair as the Fed looks to conclude its easing cycle.