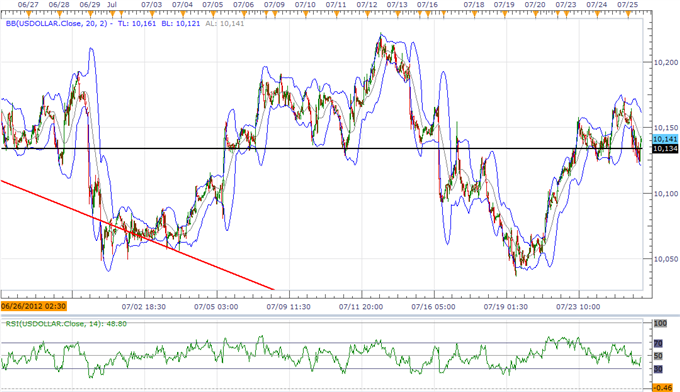 The Dow Jones-FXCM U.S. Dollar Index (Ticker: USDollar) remains 0.19 percent lower from the open after moving 93 percent of its average true range, but the rebound in the 30-minute relative strength index should continue to push the dollar towards 10,200 as the index carves out a higher low in July. Although the dismal U.S. New Homes Sales report raises the scope for additional monetary support, the unexpected decline in home purchases appears to be a larger impact on market sentiment, and we may see the shift away from risk-taking behavior gather pace throughout the remainder of the week as the outlook for global growth deteriorates. However, as the advance GDP report for the world’s largest economy is expected to show a slower pace of growth in the second quarter, a dismal print may renew speculation for another large-scale asset purchase program, and bets for QE3 may produce another run at the 10,050 figure as the Fed keeps the door open to expand its balance sheet further. 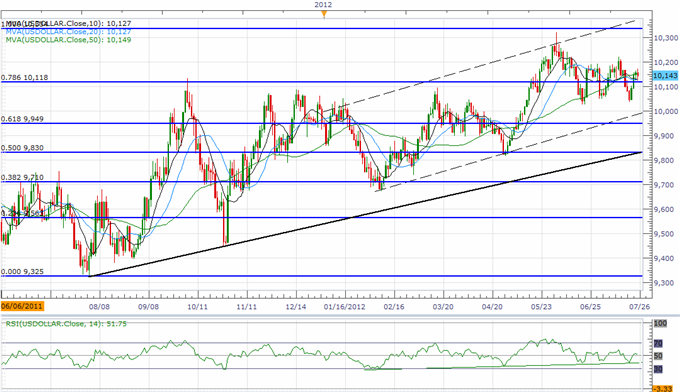 As the USDOLLAR maintains the range-bound price action carried over from the previous month, we may see the greenback track sideways during the final days of July, but we will maintain our bullish outlook for the reserve currency as the upward trend from earlier this year continues to take shape. The rebound in the relative strength index gives us conviction for a move towards the 10,200 figure, but it seems as though we will need a fundamental catalyst to see the index threaten the range from 10,025 to 10,220. Beyond the 2Q GDP report, market participants will certainly turn their attention to the FOMC interest rate decision on tap for the following week, and the central bank may continue to strike a cautious tone for the region in light of the slowing recovery. However, we may see the committee move away from quantitative easing as Fed officials anticipate to see stronger growth later this year, and it seems as though the central bank will refrain from expanding its balance sheet further as it continues to carry out ‘Operation Twist.’

Two of the four components strengthened against the greenback, led by a 0.57 percent rally in the Australian dollar, but the AUDUSD appears to be at a tipping point as the pair struggles to maintain the upward trend carried over from the previous month. The lack of momentum to test the April high (1.0473) suggests that the pair is carving out a lower top in July, and we would like to see the relative strength index push below interim support around the 50 figure to favor further declines in the exchange rate. As the short-term rally tapers off, we may see the AUDUSD work its way back towards the 38.2 percent Fibonacci retracement from the 2010 low to the 2011 high around 0.9930-40, but the pair may struggle to maintain the rebound from June (0.9580) as market participants continue to see lower borrowing costs in the $1T economy. According to Credit Suisse overnight index swaps, market participants are still pricing the cash rate to fall by more than 100bp over the next12-months, and the aussie-dollar remains poised to face additional headwinds over the near-term as interest rate expectations deteriorate.