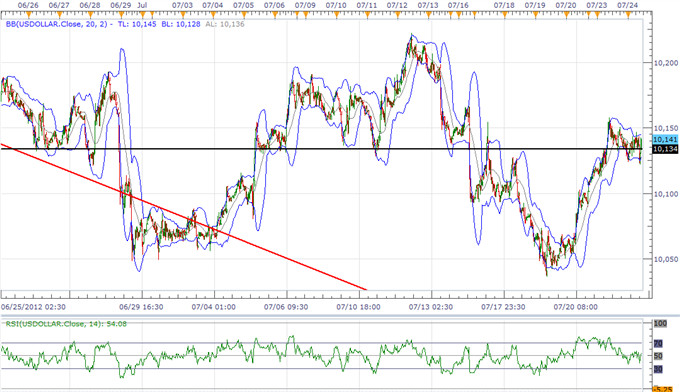 Although the Dow Jones-FXCM U.S. Dollar Index (Ticker: USDollar) remains 0.08 percent lower from the open, we’re seeing the 30-minute relative strength index come off of the low, and the rebound in the oscillator may continue to foster range-bounce prices in the greenback as it appears to be building a short-term base in July. As negative headlines coming out of the euro-area drags on market sentiment, the flight to safety may get carried into the middle of the week, and the dollar may continue to retrace the decline from earlier this month as European policy makers struggle to restore investor confidence. In turn, we will maintain our bullish forecast for the dollar, and we are still waiting to see a larger move to the topside as the reserve currency continues to benefit from safe-haven flows. 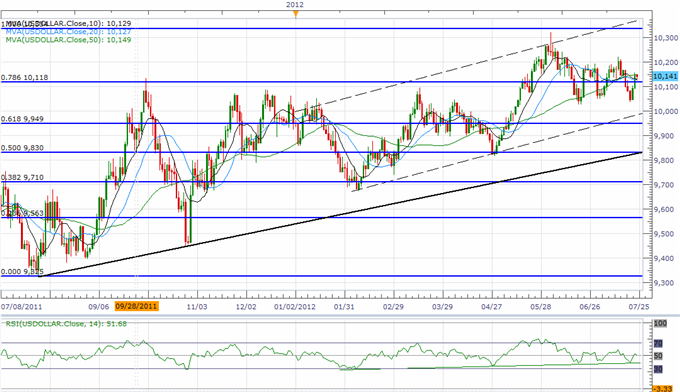 As the USDOLLAR continues to carve a short-term base above the June low (10,025), the index looks poised for a bullish breakout, and we are still looking for a move towards the 100 percent Fibonacci retracement around 10,334 as the upward trend in the relative strength index continues to take shape. However, as the advanced GDP report is expected to show the world’s largest economy expanding at a slower pace in the second quarter, we may see the dollar track sideways ahead of the print as market participants weigh the outlook for monetary policy. As the Fed keeps the door open to expand its balance sheet further, a dismal growth figure is likely to fuel speculation for another large-scale asset purchase program, but it seems as though the FOMC is gradually moving away from quantitative easing as the region gets on a more sustainable path. In turn, we would need to see a marked slowdown in growth for the committee to lean towards more easing, and it seems as though the central bank will preserve it current policy throughout the remainder of the year as Fed officials see a faster recovery over the coming months.

The greenback weakened against three of the four components led by a 0.21 percent rally in the Japanese Yen, and the low-yielding currency may continue to outperform against its U.S. counterpart as positive real interest rates in Japan raises the appeal of the Yen. As the USDJPY approaches the June low (77.65), there’s renewed expectations that the Bank of Japan take additional steps to stem the ongoing strength in the local currency, but it seems as though the central bank will refrain from intervening in the FX market as BoJ officials hold an improved outlook for the region. However, as the central bank aims to achieve the 1 percent target for inflation, we may see the board continue to expand its asset purchase program, and we should see Governor Masaaki Shirakawa maintain his pledge to pursue powerful monetary easing in an effort to stem the risk for deflation. Nevertheless, the USDJPY may continue to track lower as it maintains the downward trending channel from earlier this month, but we will need to watch the RSI as it approaches oversold territory.