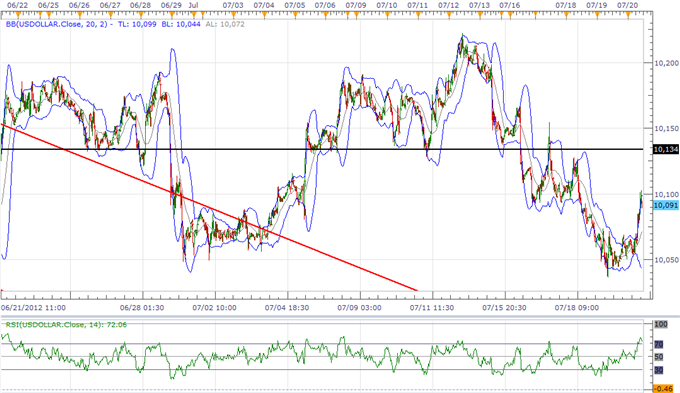 The Dow Jones-FXCM U.S. Dollar Index (Ticker: USDollar) is 0.43 percent higher from the open after moving 90 percent of its average true range, and the greenback looks poised to track higher in the days ahead as the flight to safety gathers pace. As the weakening outlook for the euro-area continues to drag on investor confidence, we should see the rebound from 10,036 get carried into the following week, and we will maintain a bullish outlook for the dollar as it continues to hold above the June low (10,025). However, as the 30-minute relative strength index pushes into oversold territory, we should see a short-term pullback once the oscillator slips back below 70, and we will look to buy dips in the greenback as it benefits from safe-haven flows. 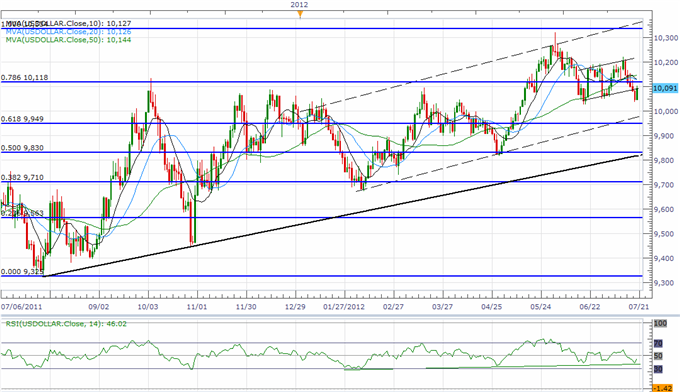 As the USDOLLAR carves out a higher low in July, we should see the upward trend from earlier this year continue to take shape, and the index looks poised to make another run at the 10,200 figure as the relative strength index bounces off of trendline support. However, as the economic docket is expected to show a slowing recovery in the U.S., a dismal 2Q GDP report may fuel expectations for additional monetary support, and speculation for another round of quantitative easing may produce fresh monthly lows in the index as the Fed keeps the door open to expand its balance sheet further. Nevertheless, we still see limited scope for QE3 as the world’s largest economy continues to chug along, and the FOMC may stick to the sidelines throughout the remainder of the year as central bank officials anticipate the recovery to gradually gather pace in the coming months.

The greenback weakened against three of the four components, led by a 0.90 percent decline in the Euro, while the Japanese Yen advanced 0.09 percent amid the drop in risk-taking behavior. As positive real interest rates in Japan continues to increase the appeal of the Yen, the USDJPY looks poised to give back the rebound from 77.65, and the low-yielding currency may appreciate further against its U.S. counterpart as the Bank of Japan sticks to the sidelines. Although the BoJ maintains its pledge to purse powerful monetary easing, it seems as though the central bank will maintain its current policy as the board raises its outlook for the region. In turn, Governor Masaaki Shirakawa may face increased pressure to intervene in the currency market, but we may see the central bank head continue to defy calls by the government as the economic recovery picks up.