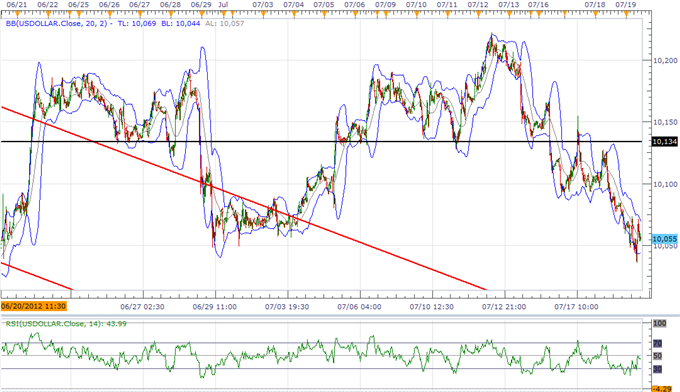 Although the Dow Jones-FXCM U.S. Dollar Index (Ticker: USDollar) remains 0.17 percent lower from the open, we may see the rebound from 10,036 gather pace over the next 24-hours of trading as the 30-minute relative strength index bounces back from oversold territory. Indeed, the slew of dismal developments coming out of the world’s largest economy appears to be weighing on market sentiment, and we may see currency traders continue to scale back their appetite for risk as headlines coming out of Europe fuels fears for contagion. As the EU struggles to curb heightening borrowing costs in Spain, the ongoing turmoil in the euro-area may continue to sap investor confidence, and we may see a flight to safety emerge in the days ahead as the group maintains a reactionary approach in addressing the debt crisis. 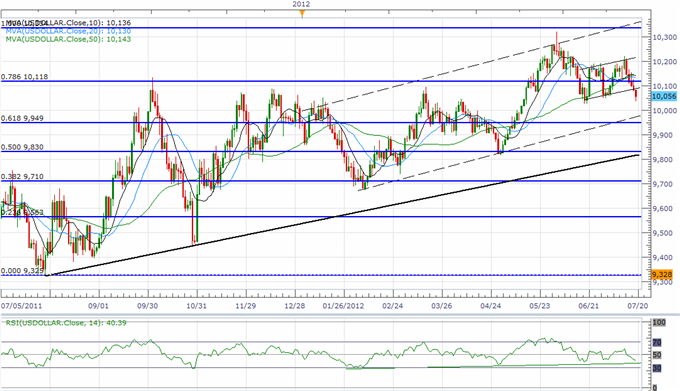 As euro-area finance ministers are scheduled to discuss Spain’s EUR 100B bailout later today, Germany is expected to vote in favor of the extraordinary measure, and the move may prop up risk-taking behavior as it alleviates the ongoing turmoil in the financial system. However, the development may fail to spur a meaningful rally in risk as the new initiative does little to address the root cause of the debt crisis, and we should see the European Central Bank continue to embark on its easing cycle as the governments operating under the fixed-exchange rate become increasingly reliant on monetary support. Although the USDOLLAR failed to maintain the upward trending channel within the broader trend, we will stick to our bullish forecast as long as it holds above the June low (10,025). As the relative strength index maintains the upward trend from earlier this year, we should get a rebound going into the end of the week, and we will look to buy dips in the greenback as risk sentiment appears to be tapering off.

Three of the four components advanced against the greenback, led by a 0.57 percent rally in the Australian dollar, but the bullish momentum in the AUDUSD could be nearing an end as the relative strength index approaches overbought territory. The fundamental outlook for the $1T economy continues to cast a bearish outlook for the aussie-dollar as the Reserve Bank of Australia is widely expected to deliver additional rate cuts over the coming months, and the central bank should continue to strike a dovish tone for monetary policy as the slowdown in China – Australia’s largest trading partner – dampens the outlook for growth. In turn, we ‘re looking to fade the short-term rally in the AUDUSD, and we would need to see the pair hold below the April high (1.0473) to maintain our bearish forecast.